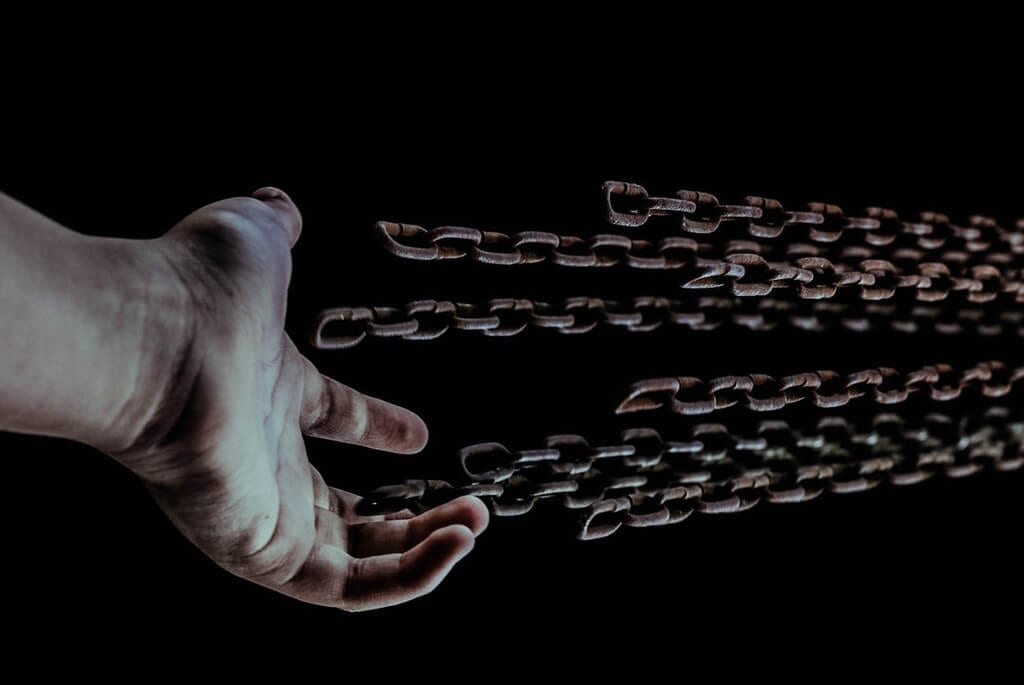 Bonding routers combine two or more Internet connections. These routers do, what in the networking world, is referred to as link aggregation. Other names used within this context are bandwidth bonding, channel bonding, and WAN bonding.

There are two very significant benefits of using an Internet Bonding Appliance: improving bandwidth where a single connection might be limited or slow and providing a failover solution.

When accessing the Internet, users are limited to what their local ISP offers. Although ISPs offer a variety of plans, from home to enterprise— businesses sometimes need more speed and reliability than what they can get from their ISPs. Especially when dealing with bandwidth and reliability demanding applications.

We will be reviewing an Internet Bonding Appliance solution that addresses these challenges. The solution is based on the following network appliances FW-7573 a high port density appliance, FW-7584, a high-performance appliance and NCA-1515 an intelligent appliance designed for virtualization. Any of these devices are capable of aggregating links from different sources into a single connection.

ISPs are still offering the same network technology that has been around for a couple of years, from ADSL, cable, T1s, LTE, fiber, wireless, etc. Although they do offer flexibility in their plans, the single-network technology approach may not give a customer the guarantee of speed and reliability. This is especially true for companies located in remote areas, where the local ISP’s offerings are all they have. They may choose one network technology or the other but not more than that.

Wired connections might be faster, but wires do not run all over the place. And if a company manages to have access to wired infrastructure, the ISP will give them access to the Internet through one link. Wireless might solve the coverage problem, but brings other issues, like slower speeds, interference, etc.

Below are two of the most common challenges with ISPs’ current offerings.

Companies headquartered or with branch offices in remote areas are limited to what their local ISPs offer. For example, customers in remote locations trying to access the cloud to run specific data-intensive workloads might need high-speed bandwidth access. But ISPs might provide limited bandwidth options in these remote areas. In the same case, customers with a high demand for priority in voice and video quality are limited to their ISP’s single links.

A business might buy a couple of disaggregated high-speed links from the local ISP, but that creates the Single Point of Failure. Nowadays, companies shouldn’t tolerate Internet connections with the risk of failure and downtime. One day without the Internet can turn down a business with a significant loss.

The single point of failure also applies to VPN connections. When a VPN connection to a headquarters fails, all home-based or mobile workers are left out of the network.

For example, two fiber connections running with 1Gbps downstream and 500Mbps upstream will be bonded to provide one big 2Gbps (Down) /1Gbps (Up). 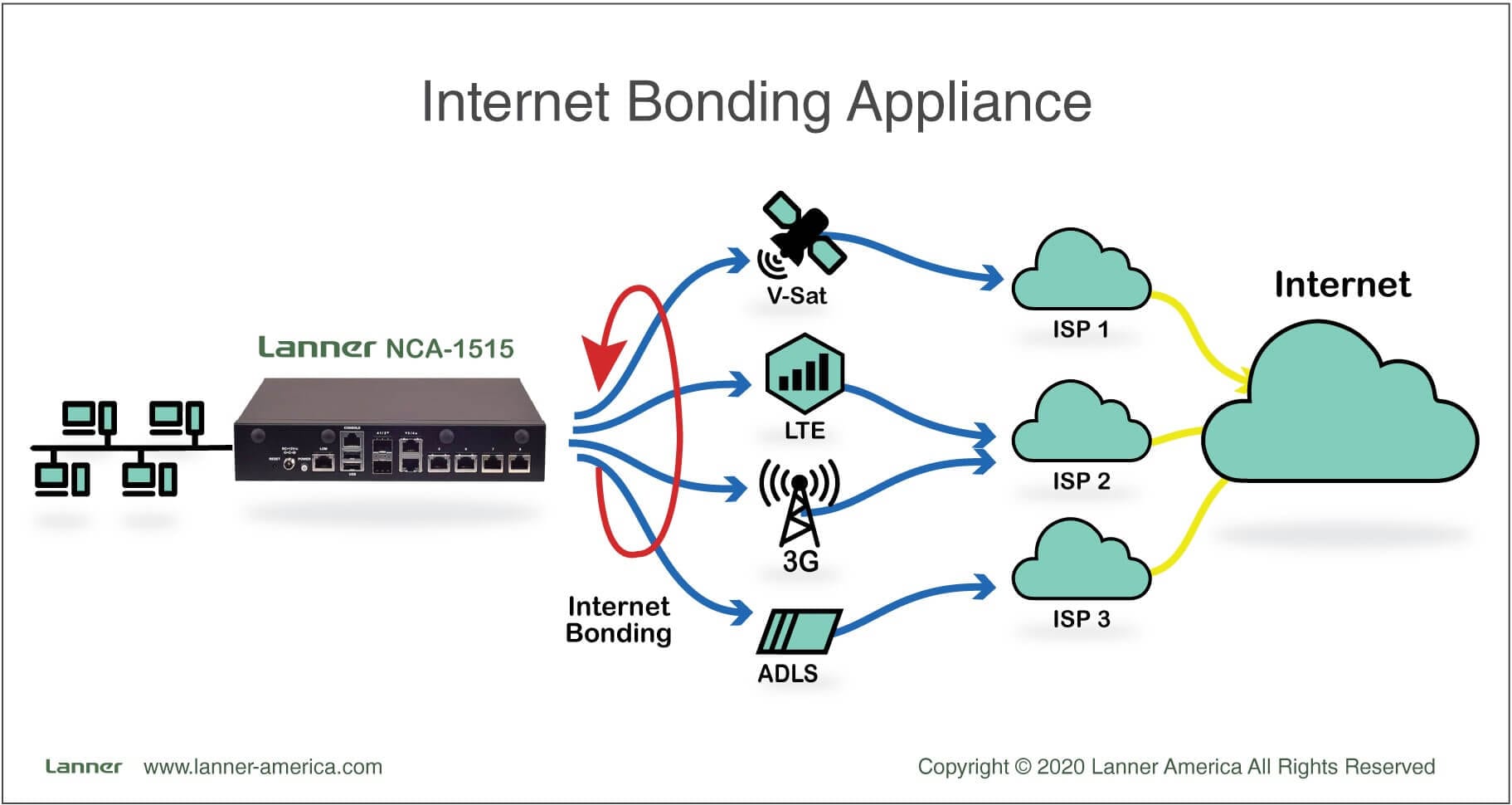 An Internet Bonding Appliance must be rich in I/O networks. For example, having a couple of Ethernet Gb ports is not enough. An Internet bonding appliance must have a handful of ports for WAN and LAN and interfaces for wireless networks, including WiFi and broadband.

Another important feature of Internet bonding appliances is the LAN bypass. This feature is used to prevent a failed networking appliance from blocking crucial incoming/outgoing Internet traffic. LAN bypasses ensure a continuous flow of network traffic with fault-tolerance between WAN and LAN ports.

The FW-7584 is designed for UTM, firewall, VPN, IPS, WAN optimization, and Internet bonding. It comes with Intel® AES New Instruction (Intel® AES-NI) to accelerate data encryption and decryption processes at the hardware.

The NCA-1515 appliance is ready for virtualization to run as an SD-WAN appliance or as uCPE. SD-WAN appliances can take multiple Internet links and combine them to form a single link. Different connections are plugged into the NCA-1515 (ADSL, fiber, LTE, etc.) and output as one.

The appliance may also be used for SD-Security, UTM, IDS/IPS, or Firewall.

As mentioned earlier, an Internet Bonding Appliance combines different network connections together, whether they are wireless or wired. Also, regardless of the Internet traffic source, whether it is a local ISP or remote VSAT internet provider— all traffic will ultimately be shared into a single local connection.

So, what are the benefits of bonding all these connections together?

Maximize the usage of all available bandwidth by combining disaggregated Internet links. Bonding connections increase the throughput to near the total combined value of all connections.

The Internet bonding appliance solution also improves broadband speeds in areas where it is usually slower or limited. The bandwidth may also be scaled down or up on-demand. Adding or removing links by configuring their priority when scaling is needed.

Connection bonding does not distribute traffic across multiple connections as a load balancer would; instead, it bonds or aggregates them together into a single link. This bonding improves not only bandwidth but also connection stability and reliability.

An internet bonding appliance deals with the single point of failure challenge. It guarantees uptime by automating failover functions between wired, wireless, or both connections. The LTE-only bonding appliance, it is also referred to as LTE failover appliance.

Within WAN deployments, VPNs are the tools providing secure communication between headquarters and branch offices. But a VPN server connection with all its clients is usually established with a single Internet connection. If the VPN server’s ISP connection fails, all branch offices are out of their VPN connection.

Photo by Zulmaury Saavedra on Unsplash