5 service provider network upgrades that will enable the Virtual Reality, Augmented Reality and Mixed Reality we’ve all been waiting for

Virtual reality, augmented reality and mixed reality are easily some of the most anticipated technologies of the century, but for many early adopters the concept is starting to lose appeal. Some from growing disappointment with current implementations, others discouraged entirely from the high cost-barrier to entry from acquiring the headset and necessary computing elements.  With several failed attempts (even from technology giants such as google), people grow increasingly skeptical of the futuristic applications that many have touted as the next evolution for humanity.

Why the networks need upgrade?

There are several examples of virtual/augmented reality showing the weaknesses and bottlenecks in existing cloud networking, computing and storage solutions. Pokémon Go, one of the first Augmented reality applications to go viral, experienced numerous outages from service saturation – and that was running on Google’s state-of-the-art cloud platform.

The harsh reality is that the current state of our networks, underlying technology and supporting infrastructure all suffer from fundamental limitations that bottleneck the futuristic technology, keeping it constrained to expensive and localized installations. The bulky headsets, the inherent latency in the round-trip times (RTT) to the service provider’s data center, and limited bandwidth are all major issues that must be resolved for AR and VR to finally become the envisioned game changer.

5 Service provider network upgrades that will enhance the VR, AR and MR

Luckily, several advancements in telecommunications are driving innovation within communication service provider’s (CSP) networks, tackling most -if not all- of these shortcomings and enabling a vast array of applications outside of VR/AR. In this article, I will be focusing on 5 innovations whose success will eliminate many limitations within our current networks and provide the infrastructure necessary to bring virtual and augment/mixed reality to its full potential.

This initiative started with the release of the first NFV whitepaper by the European Telecommunications Standards Institute (ETSI). It specifies several issues with current networks that are built using proprietary hardware-appliances: vendor lock-in, new service agility, interoperability and orchestration are all addressed and improved by a new, fully-virtualized network implementation. Functions that were previously implemented on proprietary silicon and deployed on standalone hardware appliances now exist as Virtual Network Functions (VNF) which can instantly be created, deployed and controlled on standardized open hardware platforms.

Instead of deploying additional hardware-appliances for new services, commodity of-the-shelf (COTS) hardware –i.e. x86 networking hardware, can be used to run the software-based functions. Leveraging hardware accelerators inside the CPU, network interface cards (NIC) and PCI add on-cards, NFV can prioritize portability and interoperability without sacrificing too much performance and power-efficiency.

This was (and still is) the first major challenge in the network evolution path. Once all of the functions and services have been virtualized, they can be deployed when and wherever they are needed (ideally as close the user as possible).This critical step will set the foundation from which to build new services and applications, like the virtual world servers people log into for immersive virtual reality. 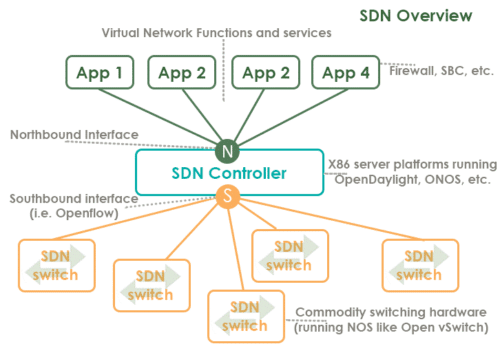 Born out of a need to maximize flexibility and scalability while simplifying orchestration, software-defined networks are a natural evolution to modern, automatized networks. Its implementation allows network operators to systematically start, stop, control, change and orchestrate how the network behaves through open standards and interfaces from a centralized controller. To accomplish this, separation of the control plane and the data plane was necessary –that is separating the components that decide where traffic goes (control plane) from the traffic (data) itself.

SDN is for the most part seen as the master orchestrator which controls how the network behaves, where traffic flows, what paths to take, etc. –using openflow or alternative software implementations (e.g. ONS).  This also greatly improves network security through simplified network visibility and manageability.

Together with NFV, these two technologies aim to create a programmable, elastic and inexpensive next-generation network for managed service providers (MNO’s) and CSPs. The centralized controller is run on commodity hardware, making it easy to leverage additional resources from shared hardware infraestructure. This is a technological leap in automation and orchestration that will create the flexibility needed to properly utilize available resources on the fly. 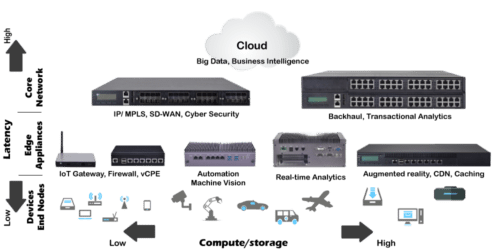 Latency, one of –if not the– most important network aspects when it comes to virtual reality, as motion sickness can be induced from latencies extending above 13ms. Achieving a stable latency of 20ms (or less) with powerful computing resources at the edge will resolve many issues with online gaming, and video streaming to create deceptively realistic experiences.

Multi-access edge computing is a method for applying NFV as close to the user as possible (also known as distributed NFV). This resolves issues from round-trip times to the datacenter by pushing the computing and storage resources closer to the network edge.

In immersive Virtual reality where any latency can be perceived and break the experience, this is one of the key techniques that will allow users to make use of powerful hardware in a cost-efficient and viable manner.

Taking the concepts of NFV, SDN and MEC and maximizing its reach and cost-effectiveness, network operators are outfitting their central offices to more resemble the large array of computing and storage resources that datacenters are known for (hence the name).  With sufficient computing and storage resources now placed very close to the user, service providers and network operators can offload heavy or latency sensitive applications to the edge of the network. Avoiding round-trip times to the datacenter and congested or expensive backbone networks to support the haul to the service providers core network.

Striking the perfect balance between coverage, latency and cost, CORD will transform the way services are deployed and allow a myriad of new applications that wouldn’t be possible because of the round-trip induced latency, shortage of resources and slugish service agility.

This will place a large pool of computing/storage resources at the network edge available to everyone connected to the central office, thus lowering the cost of deployments, and ultimately the cost for the end users. Virtual reality and augmented reality applications and static content can then be cost-effectively deployed closely to the user and eliminate human perceptible lag in the network.

With the core, backbone and edge network all getting major upgrades, there’s only one bottleneck in the network left –the access network. 5G is a network access technology set to bring about the characteristics of wired gigabit ethernet to the wireless age. With aims to reduce the access network latencies down to ~1ms, increase bandwidth and spectrum efficiency.

This will enable an always-on, augmented world were AR glasses can be used to their full potential. Unshackled from bulky cables, users will be able to walk freely and utilize the power of the service providers network. Self-driving vehicles, 4k-8k video streaming, tactile networks and of course VR/AR all stand to benefit from this impending upgrade to the wireless access networks.

With all of the network elements in place ready to provide next-generation capabilities to devices, it’s time to integrate technologies more closely with our lives to make the interactions between the virtual and real world much more substantial. Well placed IoT sensors, smart lighting and smart thermostats may all eventually have a role to play in creating immersive experiences. The more “smart” connected devices available for data collection (sensory) and actuation, the more possibilities open up in a highly-connected world.

In many futuristic Sci-Fi series (i.e. Netflix’s Black Mirror, HBO’s Westworld) smartphones and computers control everything; from cars and doors, to toasters and coffee makers. Full interoperability between devices is seen as the future, and for good reasons. Technology is seen as the ultimate assistance and automation tool, and the evolution of it seems clear: ever-increasing efficiency and automations ultimately as a goal towards increased productivity and functionality. The Internet of things is a movement towards this direction, with the IPv4/v6 protocols as the universal language ready to enable universal interoperability.

Not just for video games

Though the first industries to invest heavily into the technology, outside of the entertainment and recreational value, virtual reality and augmented reality have much to offer.

At home workers, factory and warehouse workers can all benefit from augmented reality. Ideally, any job that requires manual labor can benefit from a hands-free stream of information related to the task. From simple maintenance/repair jobs, to complex systems requiring hours of labor. When augmented reality is coupled with advanced AI, futuristic technologies seen in movies like iron man can become mainstream. Detailed steps, real-time corrections and calculations can all serve to increase worker efficiency, with several industries seeing a 25% increase in productivity from AR hands-free instruction manuals alone

Even without advanced AI, AR can still enable us to work together in ways we never could before, to achieve something truly great. Workers can rely on their smart glasses as an information HUD, and in more complicated cases: request assistance from other coworkers, or even off-site contractors,

Even in jobs where all of the work is done behind a computer screen, companies see better performance from employees that work in-office as opposed to remote workers. This is due to several factors, mainly: Workplace culture is easier to develop and face-to-face meetings and discussions spark more innovation.

By introducing Virtual Reality into the mix, remote workers mitigate many of the shortcomings compared to in-office workers. Carefully crafted virtual workspaces, with fully interactive life-like avatars would emulate (if not improve) on many of the aspects of an in-office work environment.

VR/AR are exciting new environments, and perhaps ideal ones, for teaching and learning.

Training videos and manuals can become infinitely more interactive, engaging and fruitful. Instead of sitting through hours of static footage, it could instead resemble video games, where players are given a certain level of freedom to interact and engage in the experience. Training lessons could be broken down into missions, optional but useful training could be created as bonus side missions and even a point system could be implemented to encourage competition and initiative amongs employees

The savings from the man hours used to train new recruits, and subsequent employee evaluations/retraining could easily offset the costs associated with creating such a virtual training program.

Some of the applications for VR/AR in healthcare are game changing. From X-ray scan overlays, to full maps of blood-vessels/organs, the application of augmented reality in surgery have a promising outlook. Virtual reality has an equally excellent role to play, in the form of an extraordinary learning and therapeutic instrument.

Virtual Reality has sedative and relaxing properties, which can be harnessed to manage a patient’s state and vitals. In cases where patients are sedated but not unconscious, this can prove a useful tool to reduce distress/panic and ultimately pain. Calming and relaxing scenes have been tested with great results on patients suffering from PTSD and anxiety.

Last year, a British doctor performed surgery using a VR head-mounted camera and live-broadcasted it for the world to see. Though it was not a real patient, this demonstrated the world of learning/teaching opportunities that VR creates.

Though numerous billions must be invested in modern network infrastructure, we are ultimately just a network evolution away from bringing affordable, immersive virtual and augmented reality to the masses. With NFV conversion already past the 60% threshold in some of the leading US telecom service providers, and many currently developing 5G small cell and CORD/m-CORD test sites, it’s simply a matter of time before we reach a futuristic virtual world.  The Internet of things has exploded, and embedded computing and networking technology is finding its way into the most mundane of objects. With the internet as the universal technology that glues together countless devices and systems, we will finally create a useable and seamless virtual reality experience.