The traffic on the streets have become more and more congested, which often cause delays for transit vehicles, especially buses. Thus, local governments are seeking cost-effective ways to improve the situation. In recent years, the technological concepts of V2I (Vehicle-to-Infrastructure) and TSP (Transit Signal Priority) have received increased attention as the reliable and cost-efficient way to free up the street congestion and make the traffic more energy efficient at the same time.

V2I allows transit vehicles to send information to the subsystems of the street and highway infrastructure, such as RFID devices, cameras, traffic lights, and digital signage. V2I relies on two-way wireless communication in order to share and exchange data between transit vehicles and subsystems. On the other hand, some local governments also implement TSP to work with V2I to improve public transit services and reduce delays. TSP, in its active mode, can adjust or modify transit signal timing and priority. For instance, transit vehicles may send signals when they are approaching an intersection, and their signals will take the priority over the ones sent from other systems.

While V2I and TSP are considered as the fundamental infrastructure for intelligent traffic, both require specialized hardware for the city’s traffic system to become V2I/TSP – ready.

A traffic management system company headquartered in North America teamed up with Lanner and a sensor system company to co-develop a highly connected vehicle computing platform, integrating the required technologies as follows:

Due to the wireless nature of V2I and TSP, the vehicle computing system must support mainstream RF (Radio Frequencies) including GPS, Wi-Fi and cellular communications such as 3G and 4G/LTE.

The software application on the required vehicle computing system leverages a precise algorithm, capable of multiple modes of communications protocols to meet various scenarios. For instance, reduce traveling times for buses by enabling green light when the buses approach the signal-received intersection. 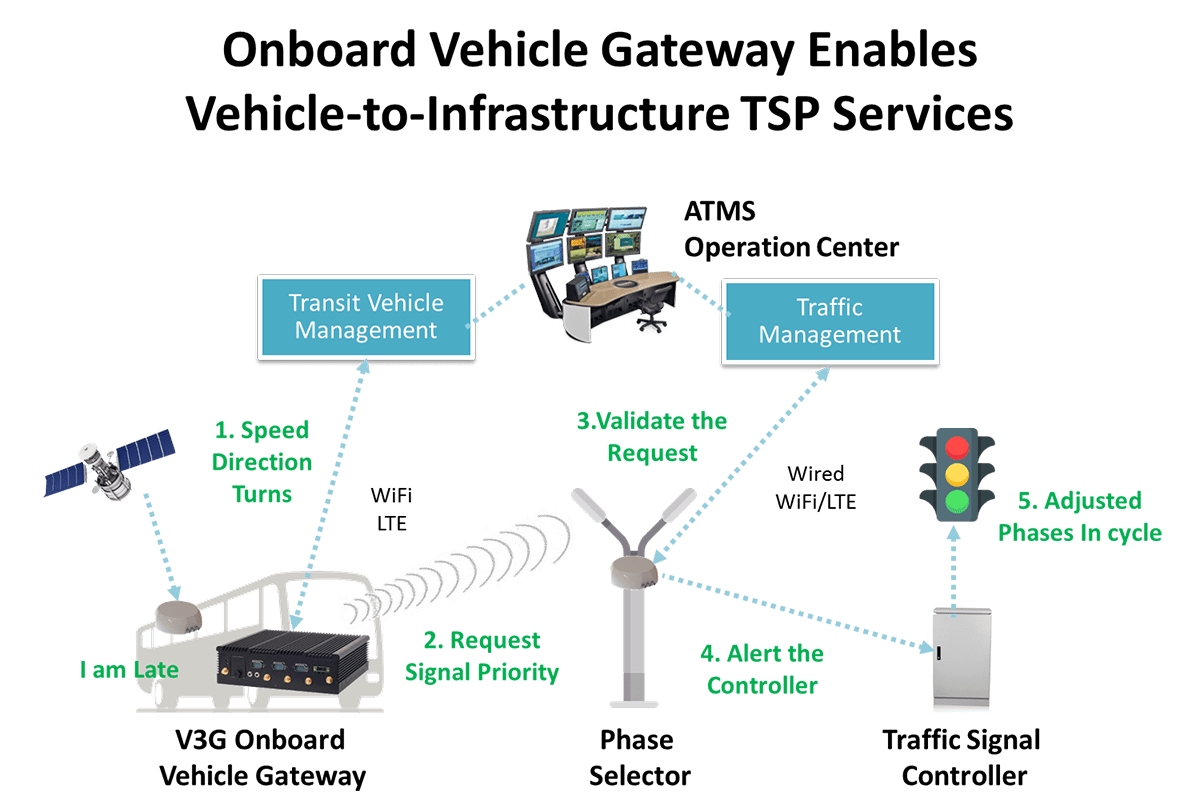 For the co-development, Lanner leveraged its V3G, a fanless vehicle gateway controller, to integrate the communication needs with V2I and TSP subsystems. In fact, the co-developed solution has been successfully deployed in multiple cities in the States. Due to its GPS-enabled, software-driven, and cloud-based nature, the solution offers cost-effective and real-time control and management.

Lanner’s LVC-2000 might be another hardware option for this deployment. Lanner LVC-2000 is a military-grade, compact in-vehicle gateway controller driven by onboard Intel® Atom™ Bay Trail E3845 CPU for power-efficiency.