In order to understand the use cases of x86 Rackmount Network Appliances for Next Generation Enterprise Threat Preventions, one must first review modern day cyber security challenges.

Staying competitive in the modern market requires enterprises adopt cloud computing, cloud storage and mobile services into their business model. But, this will bring increases in network connections that may attract ever more advanced cyber attack attempts to penetrate network protocols. Official reports have informed that about 8 of 10 organizations, regardless their scale and size, have suffered data breaches. Thus categorizing all organizations, even small and mid-sized, as being at risk from the continually increasing cyber attack attempts, especially since more and more enterprises and government organizations become targets for spear phishing, malware, ransomware and other types of threat attempts.

The enabling factor rearing the increase of attacks resides within the technological aspect. A modern day hacker poses an advanced familiarity of most conventional security systems implemented in today’s enterprise networks. With this advanced familiarity, hackers can become undetectable as they attempt to penetrate any weakness found in websites or other network protocols such as HTTP, FTP and SMTP mail server.

In actuality, they’re even able to penetrate traditional network-based signature authentications while eluding alert mechanisms. It might be possible to state that the level of sophistication in cyber attacks could be as much, if not more as that of conventional security measures.

As previously mentioned, conventional security measures are identical in many ways and with minimal effort they can be penetrated by a hacker. For that reason, successfully combating cyber threats requires a next generation hardware platform to implement virtualized software-based solutions for higher complexity threat prevention to shield against massive volumes of DDoS traffic and targeted malware.

Achieving a flawless execution of the above mentioned tasks and duties requires of high-performance, next generation hardware platforms to run web application firewall, IPS and anti-virus, Application Delivery Control (ADP) as well as ransomware and malware prevention. The following are technological advancements that must be offered by the platform selected for implementation:

According to research of successful cases in the market, a majority of the well-defended and well-structured advanced threat preventions required two hardware platforms. For that reason, Lanner offers the collaboration of a high-performance x86 Network Security Appliance and 1U x86 Rackmount Network Appliance, FW-8896 and NCA-5210, as ideal deployments for threat preventions. Both appliances offer ultra-computing power, high flexibility and reliability to get the job done. 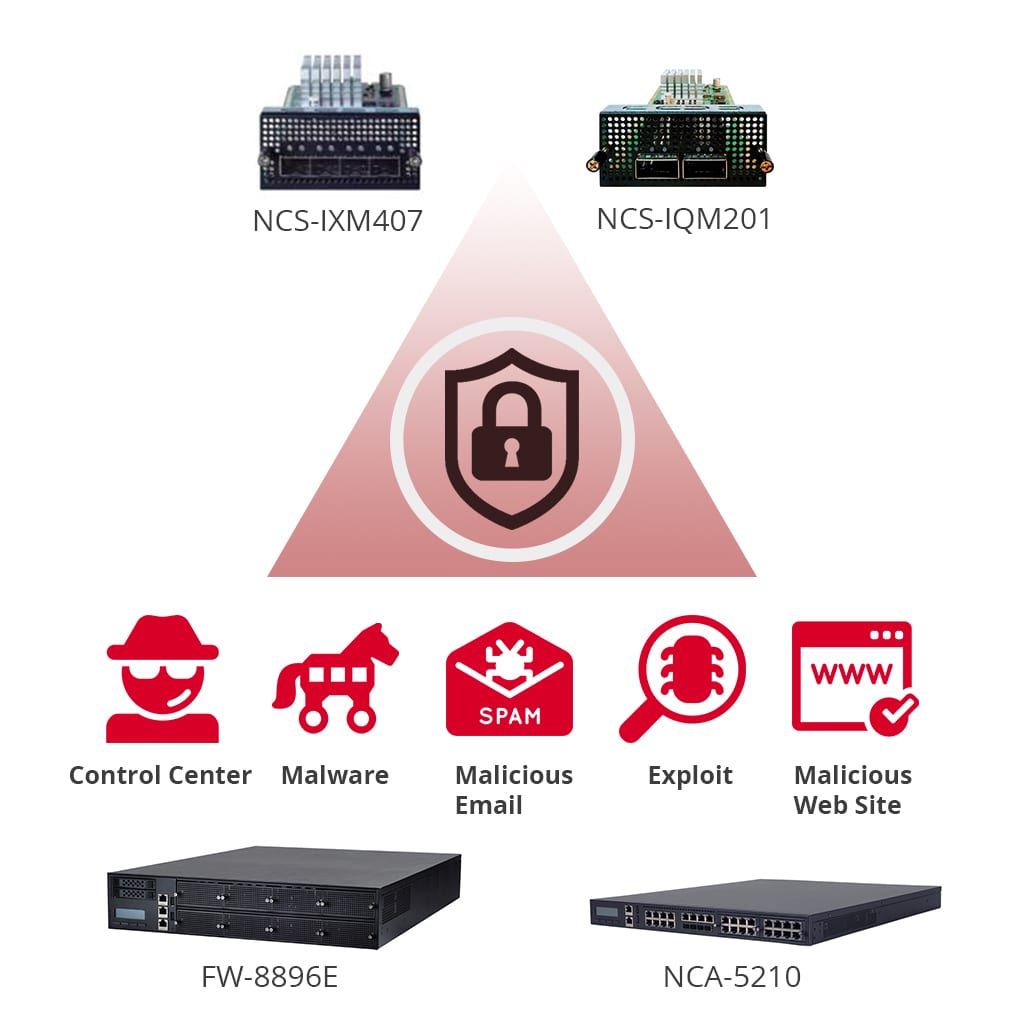 The FW-8896 appliance’s build comes with 8 NIC modules and can support up to 64 GbE ports. Moreover, the appliance is capable of supporting up to sixteen quad-channel DDR4 2133 MHz to provide a memory capacity of up to 512GB.

Presenting a 1U form factor design, Lanner’s NCA-5210 can support 8 or 12 RJ-45 GbE ports and 4 SFP LAN ports if opted, as well as 4 NIC module slots accommodating up to 40 GbE LAN once there has been installation of compatible modules. Additionally, to ensure network reliability the NCA-5210 features our latest LAN Bypass mechanism.

Both, Lanner’s FW-8896 and NCA-5210, are the top-choice in next generation threat preventions hardware solutions. 1U x86 Rackmount Network Appliance for Next Generation Firewall, UTM and Web Security