Indoor coverage for buildings has always been spotty ate best, even with the ideal obstacle-penetrating frequency bands some 4g-LTE carriers operate at. Concrete, glass and steel are all materials that impede wireless communications, as a result the DAS (Distributed Antenna System) market has continued to flourish for in-building coverage.  In-building wireless coverage is widely coveted, and a proper implementation can increase the value of real-estate by 20-30%.

Problem is, DAS are as incredibly expensive as they are, effective and all but the largest enterprises can afford them. Carriers have helped with the cost-entry barrier, but only for large buildings and venues, small/medium business owners are left to bare the full brunt of a DAS cost.

Distributed antenna systems work as a point to multipoint solution. That is a central system (base station) provides distributes RF signals across strategically placed antennas.  This results in a single, large cell that leverage the same centralized resources across the RAN. Since the resources are centralized (power management, baseband processing, etc), changing the coverage and capacity on the nodes is a simple process, allowing for an extremely versatile and robust network.

This design allows for multiple carriers as MNO’s can readily hookup their own base station hardware to the DAS. All of these characteristics allows for more flexible funding options , as multiple carriers can band together and spread the costs; this happens in large venues like stadiums, malls, etc.

DAS was designed to scale up with growing network demands, as such it is viable in large coverage scenarios, but it fails to scale down (cost-effectively) to smaller implementations. 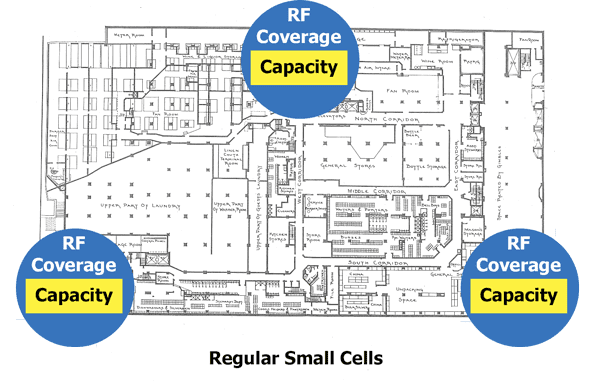 Small cells, picoCells or femtoCells operate a bit differently. Each node (small cell) houses it’s own RAN and Baseband processor, effectively creating an integrated system that works on a common backhaul technology (Ethernet, fiber). Each node is it’s own little cell tower, and as such they have to be carefully placed and modulated so as to not cause interference with each other.

Another one of the current shortcomings in small cell technology is that most systems today are single/operator, due to the fact that carriers operate on different frequencies/basebands. This limits it’s effectiveness and cost-effectiveness, considering that to add a new operator to the network means adding another small cell.

How small cell technology is evolving 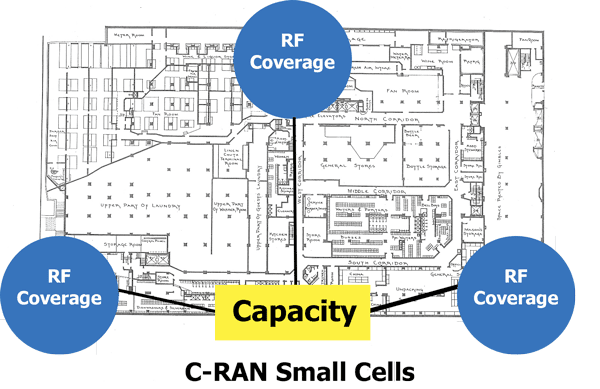 Following the continued success of DAS, next-generation small cell systems have adopted a similar C-RAN (Centralized Radio Access Network) architecture, In that the small cell antennas are now separated from the processing/resources. This enables all of the benefits in a DAS, using inexpensive COTS hardware.

This centralized architecture brings forth the best aspects of a DAS:

Zero node interference: While small cells themselves may have large power output capabilities, if the power is increased too much it can start to interfere with neighboring cells. This is not the case with a unified virtual cell architecture, as the entire system ultimately operates as a single cell.

Seamless experience: Since Small cells cover a limited range and operate as their own mini cell tower, moving through the building will cause hand-offs between the cells, not a problem for  C-RAN’s.

Future-Proof: Adding capacity/capabilities is as simple as adding more baseband processing hardware at the centralized location, as opposed to replacing/upgrading each individual cell.

Some say distributed antenna systems are dying and will eventually be replaced by small cell systems. As seen from the increasing deployments of DAS, this is simply not the case. Small cells have their place in the lower brackets of enterprises, where a DAS is not economically sound.