After a series of high-profile cyber security incidents on critical infrastructures, governments and enterprises of such facilities have taken malwares seriously into considerations. Apparently, the malwares or ransomware over the past couple years, such as Stuxnet, WannaCry and Crash Override, have exposed the vulnerability of SCADA Networks or Industrial Control Systems in today's power grid automation, railway system, natural gas pipeline, petroleum sites and other critical infrastructures.

Early 2021, a critical pipeline that supplied for the U.S. East Coast was briefly shut down after being hit by a massive ransomware attack. Such cybersecurity incidents are a growing threat, and especially for critical public infrastructures, have prompted governments to implement new regulations and guidelines to strengthen industrial network security.

In a common digitalized setting for critical infrastructures, OT controls and manages Cell Zone and Area Zone like instrumentation bus, controller LAN and supervisory HMI and SCADA systems, whereas the IT monitors and authenticates Enterprise and DMZ like, web server, email server, FTP server and enterprise servers. In a more advanced model, an Industrial Zone is established as an additional layer of protection towards externally interfaced services 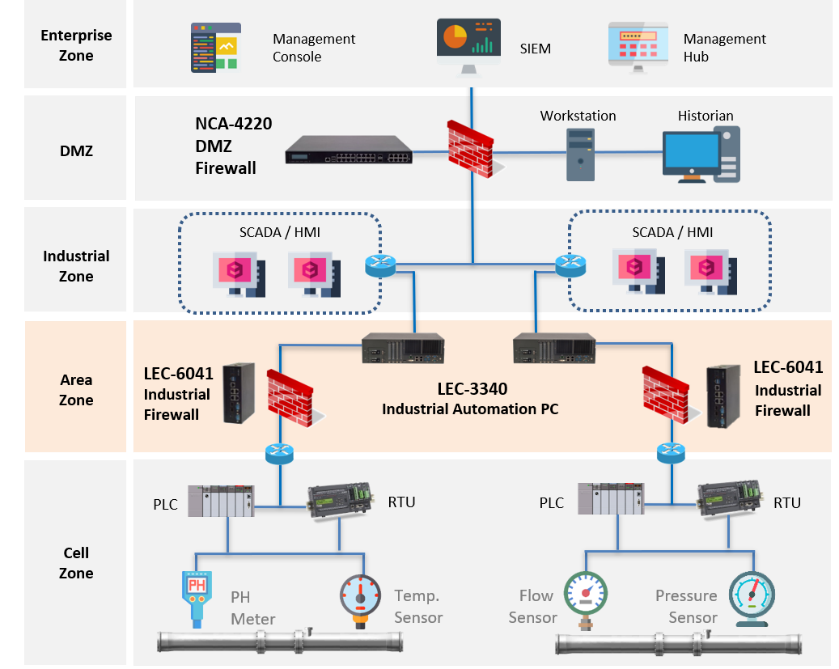 To protect the ICS/OT networks, Lanner provides purpose-built OT/IT network security appliances to manage, monitor and control the ICS and SCADA system of critical infrastructure by conducting protocol filtering, packet inspection, white-listing and network traffic monitoring. These industrial computers are designed through a combination of mechanical and thermal engineering to address the issues of electronic surge, high availability, extreme temperatures and Industrial standards.