What is Intelligent Edge? — Intelligent edge, is the concept that defines the added computation, storage, and communication capabilities of certain infrastructure located closer to the end-user, usually at a distributed network edge.

The word “edge” in this context represents the geographical proximity of where the data is being generated. In other words, the edge is the place where the “Things” of IoT are. This set of connected IoT devices are always close to the user and its data. At the edge, this data is processed with intelligence; it can get analyzed, aggregated, or addressed. The Intelligent edge uses edge computing to support these edge devices on analytics performed by AI and ML models.

The devices at the edge have the computational power and intelligence to handle different kinds of data which traditionally would have been sent to a central server in the cloud.

The intelligent edge breaks the traditional Client-Server model, where the client is usually “dumb or thin,” and the server is the one with the power to process, analyze data, and secure it. Although the intelligent edge might leverage from certain processing performed on the cloud or other remote data centers, it does not rely on a centralized power.

What is not an Intelligent Edge? — Intelligent Edge is not cloud computing. These two concepts are NOT interchangeable. Edge intelligence is preferred in remote locations where the connection is limited (or there is no connection) to a centralized location, and the data processing is time-sensitive. On the other hand, the cloud computing model relies entirely on a remote server, for storage, computations, security, etc.

A Brief History of Intelligent Edge

Intelligent edge (or edge computing) might be a new buzzword, but its underlying technology has been developing since decades ago.

1990. Edge computing can be traced back to 1990, with the origin of the first Content Delivery Network (CDN), by Akamai. This network delivered cached images and videos using distributed servers located closer to the end-user. Thanks to CDNs websites began running much faster.

1997. Around 1997, the concept of Pervasive Computing (also known as Ubiquitous Computing) which is the technology behind IoT, started to appear. Its goal was to reduce the load on the computing resources and improve the battery life of mobile devices. It offloaded certain tasks of applications that consumed more resources to local servers.

In the early 2000s, the overlay Peer-to-Peer (P2P) networks brought the concept of proximity routing to avoid slow downloads over long-distance servers. In P2P, the members of a swarm (the network of peers) were able to locate other nearby members, and download content much faster.

In the mid-2000s, around 2006 the first public cloud computing started. Amazon’s Elastic Compute Cloud (EC2) was the first service that started renting computing and storage resources to end-users.

By 2009, the Cloudlet concept was coined by M. Satyanarayanan, Victor Bahl, Ramón Cáceres, and Nigel Davies, which is also known as “follow-me-cloud” or micro-cloud. The Cloudlet is a mobility-enhanced mini cloud data center located at the edge. Its goal is similar to previous applications, to support resource-intensive mobile applications.

In the early 2010, Cisco introduced the concept of Fog Computing, which is a distributed cloud that uses intelligent edge nodes to perform a large amount of computation, storage, and communication. Fog computing brings the processing power to Local Area Networks, closer to where the data is created.

Today, we are already in the edge computing era and slowly shifting into an intelligent edge. The fact that there is a massive amount of data being generated by IoT devices outside data centers, makes the intelligence to be close to end-users. Although we are still highly dependent on the central “cloud-based server” for certain workloads or computations, the best solution is to deploy a complementary strategy for cloud and edge.

The range of operations that the Intelligent Edge can provide can be defined through the three Cs: Connect, Compute, and Control. The intelligent edge can be categorized through three different types, the OT edge, IT edge, and the IoT edge which is a convergence of IT and OT. 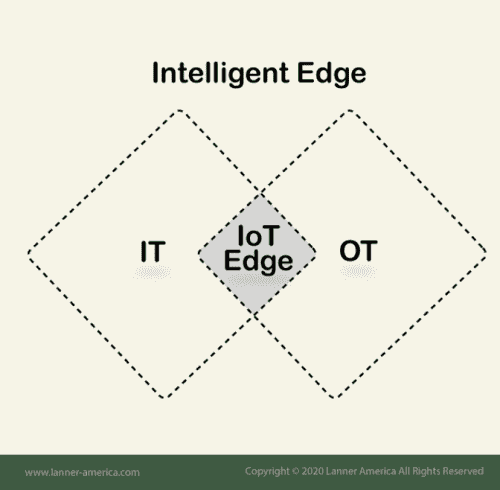 How does Intelligent Edge work?

The intelligent edge works through these four-step process following the three main components, the edge device, the edge server (IoT Gateway), and the cloud (or remote data center). 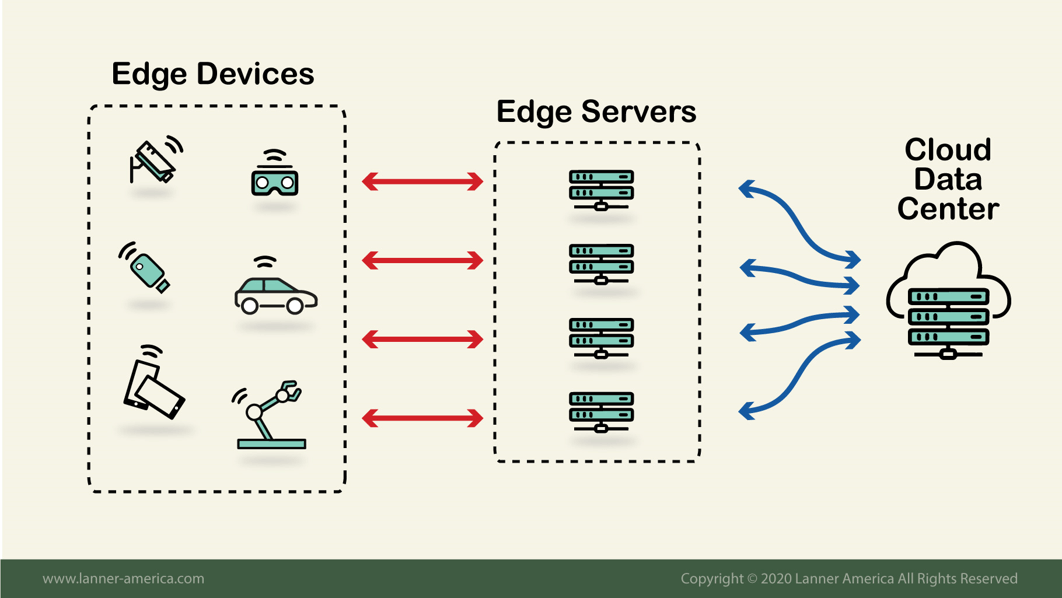 The edge device is the unit built with a purpose and with the computing capacity to fulfill that purpose. These devices are generally efficient at gathering data, pre-processing it, and then transmitting it through the network. Examples are an assembly line, a robot, an autonomous vehicle, a wind turbine, a water gauge, intelligent video cameras, VR/AR headsets, etc.

It is very common that some intelligent environments use edge servers. The purpose of these servers is to pre-process all data in near real-time and perform some processes such as orchestration, monitoring or just prepare the data for transmission to the cloud. These servers are also often used for data visualization, better analytics, data caching, buffering, streaming, data filtering, optimization, etc.

If the data needs further processing or storage, it can be sent to the cloud. The cloud complements the intelligent edge with capabilities such as further data processing, business logic, and data warehouses.

Why use Intelligent Edge?

Sending and receiving data, especially Big Data from a cloud-based server, takes time. In fact, public cloud services such as AWS offer solutions for this problem. Services such as the AWS Import/Export Disk ships you a portable storage device so you can load large amounts of data and ship the device back to AWS.

Cloud computing is an amazing solution, but it can be limited when it comes to mission-critical applications that need real-time data processing and have limited connectivity to the Internet. Bandwidth could temporarily make things faster, but it is not a scalable and cheap solution.

With the intelligent edge, instead of sending all the data out to a remote data center or cloud server for processing, some or all this data can stay close to where it was created. Not needing to move data, or big data for processing can help maximize business efficiency.

In a typical intelligent edge scenario, these nodes can bundle, analyze, refine, and encrypt the data before transmitting it into the data warehouse.

Some of the most important reasons why organizations are choosing to adopt Intelligent edge?

The Main Benefits of Intelligent Edge

With the intelligent edge, businesses can be more self-contained and decentralized. Their data processing will no longer be interrupted by a faulty network or limited connectivity to the Internet. Being capable of pre-processing data before sending it out, these businesses will be able to reduce latency, enhance their safety transmission, improve bandwidth consumption, and lower costs.

What are the benefits of using Intelligent Edge?

What are some applications of edge intelligence? — As mentioned above, the edge is where the action is taking place. It could be a power plant, a manufacturing floor, a self-driving vehicle, or even a smartphone. The edge is where the “Things” of the “IoT” are and where they are doing their computation.

The latency-sensitive applications such shown above would be inefficient relying entirely only on cloud computing. Intelligent Edge on the other hand, enables these applications to not suffer from high latencies and bandwidth bottlenecks.

The above is only a limited list of the potential applications of the intelligent edge. Basically, any term coined with the word “smart” will typically use a network of intelligent devices (IoT) that generate data at the edge and processes it on-premises.

Trends and Predictions of Intelligent Edge

Over the past few years, the intelligent edge has been consistently gaining importance. According to a report by Grand View Research, Inc, the global edge computing market is expected to reach $28.84 billion USD by 2025, with a Compound Annual Growth Rate (CAGR) of 54.0%.

Edge computing will bring new business models. Lots of vendors such as public cloud providers, Internet Service Providers (ISPs), Content Delivery Networks (CDN), or data center colocation providers have already started implementing intelligent edge to provide basic IaaS and PaaS services. The goal of most of these vendors is to decentralize connectivity to some of their services in order to support new and innovative businesses.

Edge computing and Cloud computing will coexist in harmony. According to Gartner, it is believed that by 2022 more than half of the enterprise-generated data will be created and processed outside data centers and cloud. The intelligent edge will certainly not replace cloud computing, in fact, both technologies will complement each other. In complex IoT environments that require a broad scope of requirements, a combination of both, also referred to as hybrid cloud will be the best solution.

The intelligent edge will handle IoT generated data and future AI and ML demands. Data centers or private clouds can transmit non-time-sensitive data with reliable connectivity to a public cloud to get cognitive computational processes such as AI and ML. But when it comes to IoT edge devices, they can generate massive amounts of information and their connectivity could be limited, so AI and ML must be done locally.

According to a survey from Forbes, organizations are looking towards the intelligent edge for two reasons. One, because of its potential to handle future AI and ML demands, and two, because of the fact that it can deliver services at ultra-low latencies.

In order to get the most out of intelligence provided by AI and ML algorithms, we need data, loads of data. Although some IoT or IIoT edge devices with higher computational intelligence would be capable of running those cognitive algorithms, they still wouldn’t be able to handle a massive amount of data.

That is why we still need edge servers or fog nodes. These devices sitting between IoT edge and the cloud, are capable of pre-processing data, aggregating data, and even run AI and ML on data to gain insights.

Some Lanner’s edge server and radio modules products that could help to make intelligent use of AI at the edge:

The subject of intelligent edge or edge computing can be defined with the help of other concepts. Below is a body of terms that can be used to broaden the knowledge on the subject. These terms are closely related to the intelligent edge.

For the last couple of years, cloud computing has enabled the use of on-demand advanced analytics, Artificial Intelligence, and Machine Learning service models.

But as more and more data get generated at the edge by IoT and IIoT devices, it becomes nearly impossible to forward data and rely on cloud servers across the globe. AI and ML intelligence needs to move closer to the edge, where data gets generated.

We are starting to see the negative effects of relying completely on a cloud server. There are more data bottlenecks, bandwidth throttling, and worst of all vendor lock-ins. We need intelligent edge solutions that help us overcome those side effects of cloud computing.

For more information, find out the new Intelligent Edge solutions launched by Lanner at the IoT Evolution Expo.