Most of today’s networks are still managed on a box-by-box basis, whether it is through a router, firewall, or a switch. In a traditional system, all of these devices are operated independently. There is still no way to manage, provision, and automate these types of networks.

Fortunately, Software Defined Networks (SDN) can make a network much more flexible and dynamic. It can help enterprise offices, remote sites, and cloud-based Data Centers, virtualize the majority of their networks and the related services.

The benefit of SDN is that hardware does no longer needs to be specialized or “standardized.” All the intelligence is moved into the underlying software layer and abstracted from the hardware. A single server can be put into multiple uses, just by changing the software stack.

In this article, we will learn how SDN can fix existing network bottlenecks by adding SDN-enabled hardware at the edges.

Table of Contents
1. SDN: Separating the Hardware and Software
2. Virtual Network Functions at The Edge
3. Providing Virtualized Services at The Edge With vCPEs
4. Fixing Existing Bottlenecks

SDN: Separating the Hardware and Software

With SDN, what we have always known about hardware deployment is shifting 180 degrees, and it’s becoming a more virtual appliance ecosystem. The technology is replacing traditional networking appliances with virtual Switches, vSwitches, or vRouters.

In SDN, the data and control planes are decoupled, the network intelligence is centralized, and the entire underlying hardware layer is detached from the smart software that runs on it — leaving the user plane (data packets) to be handled by the hardware and centralizing the underlying logic into a single control layer. 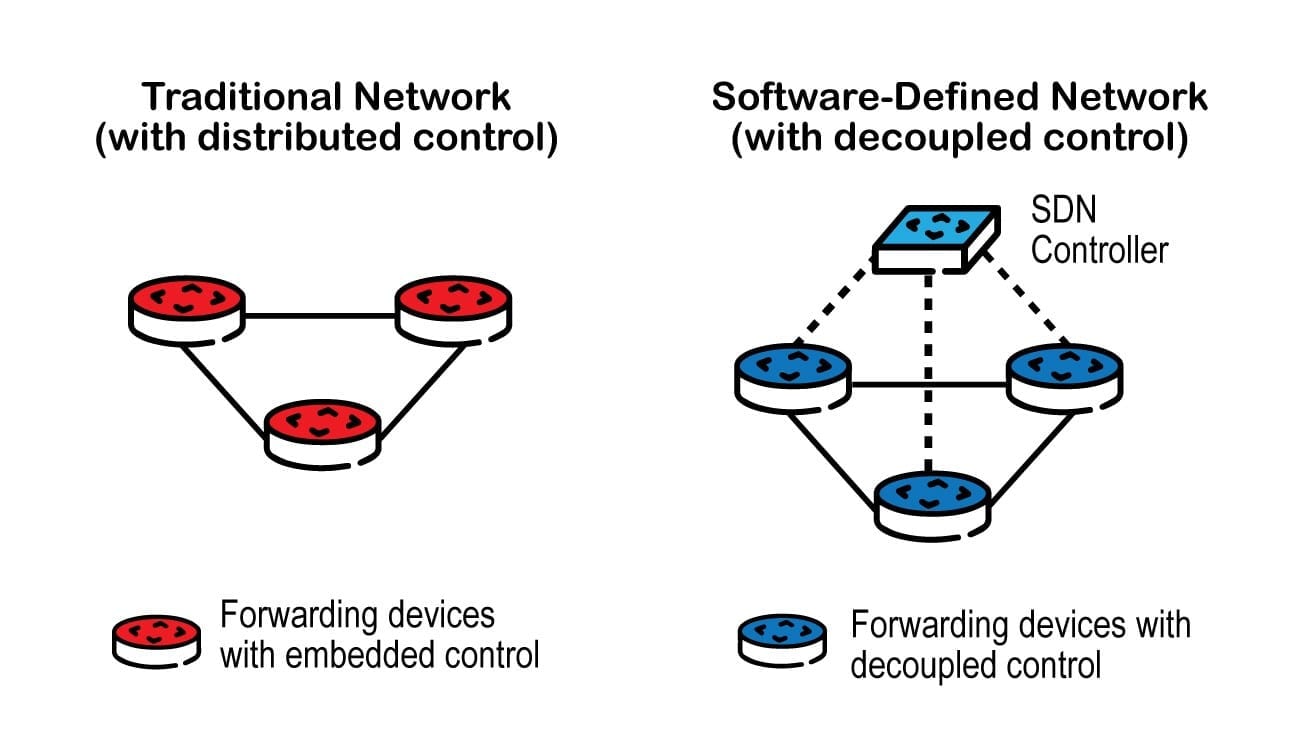 This isolation of software from hardware brings many benefits, most importantly, network optimization, monitoring, automation, and predictive analytics, which are vital for improving performance and eliminating bottlenecks.

Although the software is playing a big part in the development of the SDN, so is hardware. The appliances are usually pre-validated with a compliant open-standard hypervisor and are empowered by SDN software. Using hardware ready for SDN minimizes incompatibilities, and delivers high performance.

Virtual Network Functions at The Edge

Traditionally, an ISP or enterprise would use a set of specialized hardware at the network edge for specific services.

This hardware could range from:

But having all these boxes at the edge increases overhead and lowers performance. After all, there are more devices to manage, and more resources are spent.

With SDN, large networks can deploy generic hardware at the edge, run intelligent networking software, and provide all of those services bundled in one pack, for example, a VPN, firewall, load balancer, and WAN optimizer in a single device. So, instead of providing a network function on a specific virtual appliance, all these services can be integrated into a Virtual Network Functions (VNF) platform, to run on their existing infrastructure. A VNF can take the form of a hardware element on site. A VNF platform can manage multiple services. The provider can choose the vRouter or vSwitch with specific VNF and deploy it on the customer’s network, without having to install a lot of hardware at the branches.

Providing Virtualized Services at The Edge With vCPEs

A virtual-CPE or (Virtual Customer Premises Equipment) is a software-based endpoint that can be deployed to run in the network edge and “manage” its services or VNFs. A vCPE provides an entry point into enterprise networks or ISPs. It can also be used to deliver SD-WAN capabilities to the network and be deployed on dedicated hardware to provide the full performance that SD-WAN needs.

As a result, the end office (or branch offices) would only need to install hardware at the edge that has a physical connection to the network and a high processing capability. An advantage of using this approach is that these VNFs can be pushed to the vCPEs on the edge from the core to fulfill the same tasks as firewalls, load balancers, routers, etc. For example, a provider’s edge router from a traditional network can be replaced by a vCPE (with the right VNF services) to forward data packets using MPLS. Since SDN decouples the control plane, the vCPE handles all forwarding and the controller processing and programming is carried by a separate controller, in this case, the provider or core.

vRouters, vSwitches, or vCPEs are capable of replacing tons of traditional hardware that add latency to the network, thus reducing network bottlenecks. Plus, a NOC engineer or admin can quickly deploy a software-based device in the edge network without investing too much on expensive hardware.

Thanks to its programmable capabilities and intelligent network automation, SDN-enabled devices can help reduce bottlenecks at the edge.

How can SDN devices reduce bottlenecks?