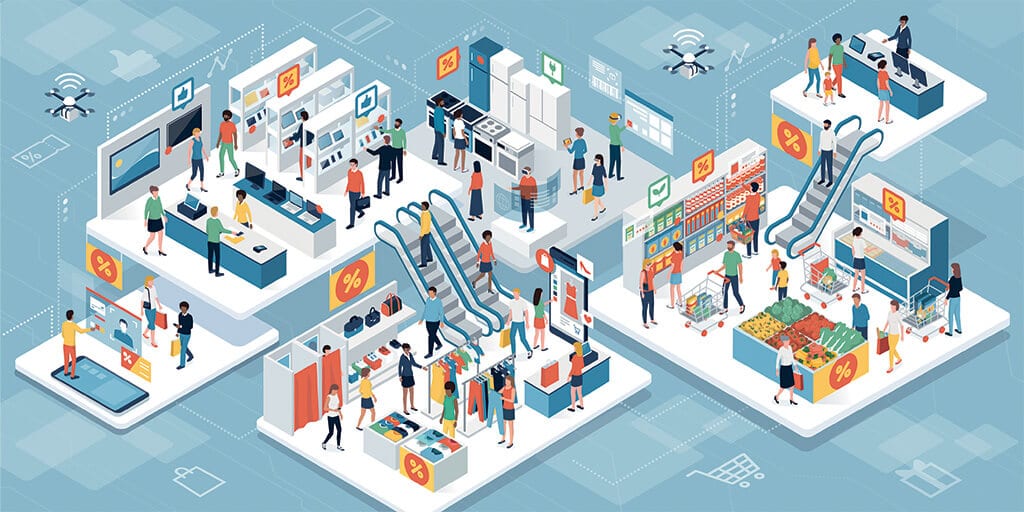 Running a single store and managing all those IT resources is doable, but when a retail company has hundreds or thousands of branch stores distributed across a country (or globally), the management and maintenance of IT infrastructure becomes quite overwhelming. Changing old hardware, reinstalling software, updating, etc. — becomes an extremely expensive and challenging exercise as stores grow.

But, when virtualization came, so did a lot of opportunities for IT to expand and innovate. Using software to define how devices and applications run in the store and separating it from its underlying hardware introduced a myriad of opportunities for the retail store market.

Table of Contents
1. The Role of IT in Retail Stores
2. The Software Retail Store: Escaping the Device-Centric Apps
2.1. On-premises vs. the Cloud?
3. Software Defined Stores Need to Run Somewhere
3.1. The Virtualization Appliance
3.2. The Compute-Intensive Edge Box
3.3. The SD-WAN Appliances
4. What Value can Software-Defined Technology Bring to the Retail Edge?
5. Final Words

The Role of IT in Retail Stores

Nearly every change, a retailer will make in its stores, products, or processes will depend somehow on IT solutions. From updating their POS systems, introducing new products into inventory, securing payment controllers, etc. Unfortunately, it is common to see these solutions falling below expectations. So, retail stores end up spending too much time implementing and maintaining their IT, that their focus turns away from what matters.

And there is a reason why:

The traditional in-store IT infrastructure tends to be bulky, complicated, and slow. Most of the retail store applications run through dedicated software, so they need dedicated hardware instances to run on-premises — they end up with a rigid IT infrastructure.

In the same case, when retail branch stores need to connect to their headquarters, this rigid infrastructure introduces high latency and bandwidth limitations — not the right solution for today’s zero patience shoppers.

The concept of Software-Defined Everything (SDE) introduces virtualization and workload-abstraction from hardware to make the retail store IT infrastructure more flexible and agile. Terms under the SDE umbrella, like the Software-Defined Retail Store, reduces the complexity of device-centric applications in stores, and SD-WAN improves WAN deployments and provides faster connections between stores.

The core app architecture found in almost all retail stores is the typical physical node running OS + application— which is the traditional device-centric application. Unfortunately, this architecture lacks agility, flexibility, and scalability.

Retailers need to rethink and re-structure their entire IT.

Virtualization helps retailers escape this device-application centralization; It takes the traditional store’s back and frontend IT resources and virtualizes them, by separating the hardware and software.  For example, virtualization takes the software from POS systems, inventory servers, payment controllers, etc., and deploys it in VM (Virtual Machine) on a centralized edge server. Of course, these virtualized servers can be deployed on the edge premises but also in the cloud.

On-premises vs. the Cloud?

Cloud could be a great solution to leverage “virtual servers” with more performance, storage, and overall powerful resources. But, again, the cloud creates just another point of centralization. With this approach, network devices now become highly crucial for transferring data to the cloud. A brick-and-mortar retail store branch with inadequate network resources would fail to leverage the cloud benefits.

On the other hand, deploying the virtualized software in an on-premise retail store server keeps the intelligence at the edge. The in-store servers can still be controlled centrally from a “cloud-hosted control plane”. But the data “main traffic” remains on site.

With virtualization the IT environments simplify dramatically, but virtual servers still need to run somewhere physical. Between servers running virtualized store apps, vCPEs running SD-WAN connecting to headquarters, and even firewalls protecting the store’s data, there is a need for the underlying hardware.

Below are examples of these types of generic hardware that can make software retail store a reality:

The NCA-4020 is a verified x86 rackmount network appliance designed for improved network and computing performance. The in-store devices, POS terminals, etc., connect to the virtualization appliance running the VM with the OS and software.

The NCA-4020 is an edge intelligence appliance — its specifications are: 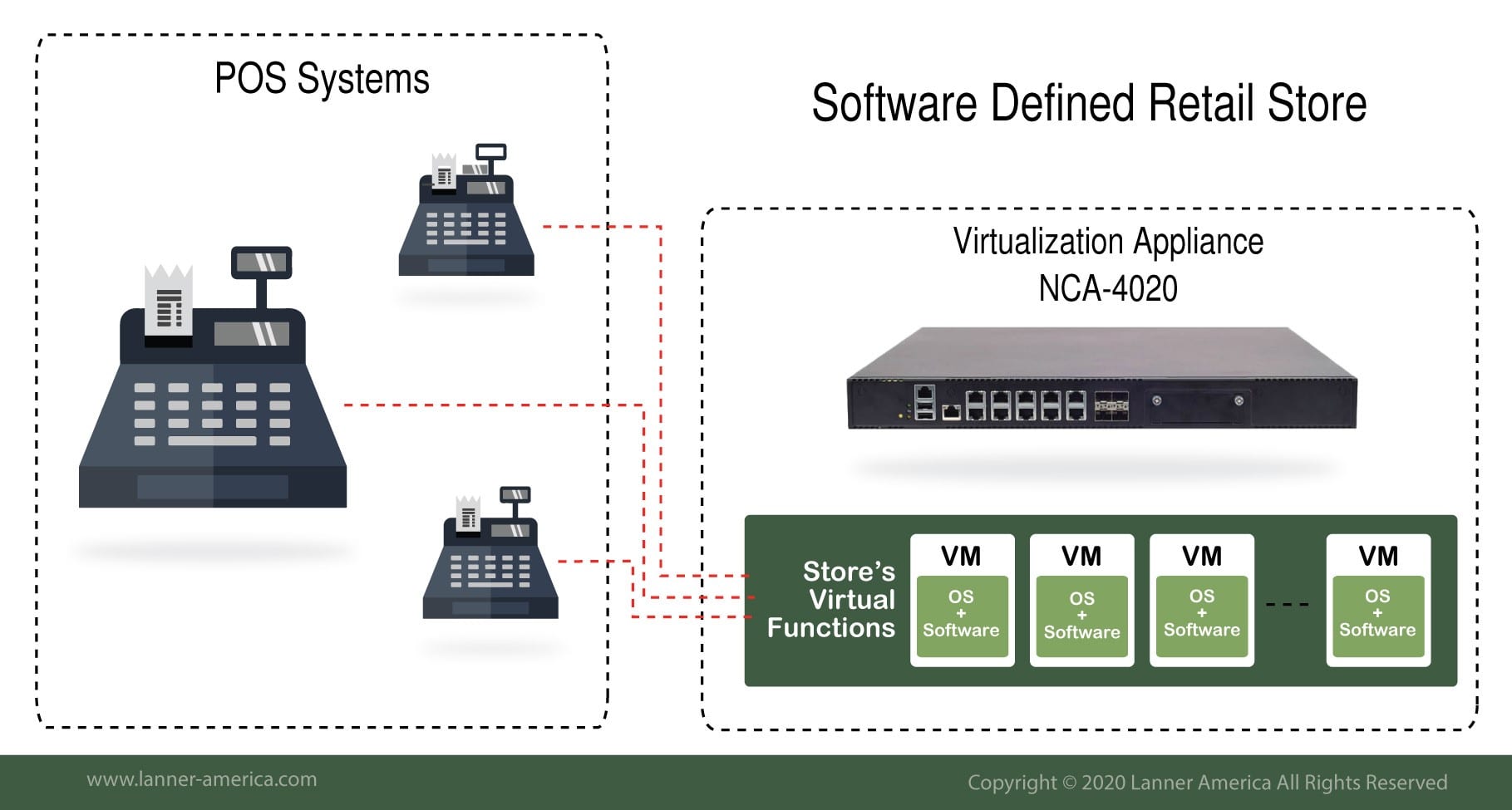 The LEC-2290 is an edge server box designed for compute-intensive workload consolidation. This embedded platform is powerful enough to run many virtual machines simultaneously. It is also rich in I/O— presenting an opportunity to connect store device’s peripherals.

The NCR-1510 and the NCA-2510 are x86 desktop network appliances optimized for virtualization. These appliances can be used as vCPE, uCPE, SD-WAN and SD-Security platforms. These SD-WAN appliances provide all the benefits of virtualization to the network layer. They provide the flexibility, agility, provisioning, reliability, and scalability to the WAN connectivity.

SD-WAN enhances this software-defined retail store solution, because it introduces another layer of virtualization technology to the store, at the WAN connection. It replaces traditional WAN routers and firewalls with virtual appliances. SD-WAN will re-shape retail store chains— it will change how they communicate with their headquarters in remote locations.

What Value can Software-Defined Technology Bring to the Retail Edge?

The software-defined edge strategy for retail stores, aims to run the store’s software on a virtual machine running on top of an edge server (as shown in the diagram above). It takes distributed endpoints across stores, from POS terminals, inventory servers, to payment controllers, and virtualizes them, so that they can be centrally managed and monitored from the single edge server.

What other benefits can software-defined technology bring to the retail stores?

Moving retail store applications’ software and OS to VMs hosted on a central virtualized server will radically reduce ITs complexity. Managing and maintaining retail store software via this central server will make things easier and straightforward for IT managers. They’ll be able to manage thousands of virtual instances from hundreds of stores, all from a single remote location.

But without a reliable connection between branches and the headquarter, managers will have difficulty monitoring those VMs. The SD-WAN is the other key component for the software-defined retail store; it will make the network easier to implement, secure, and reliable.