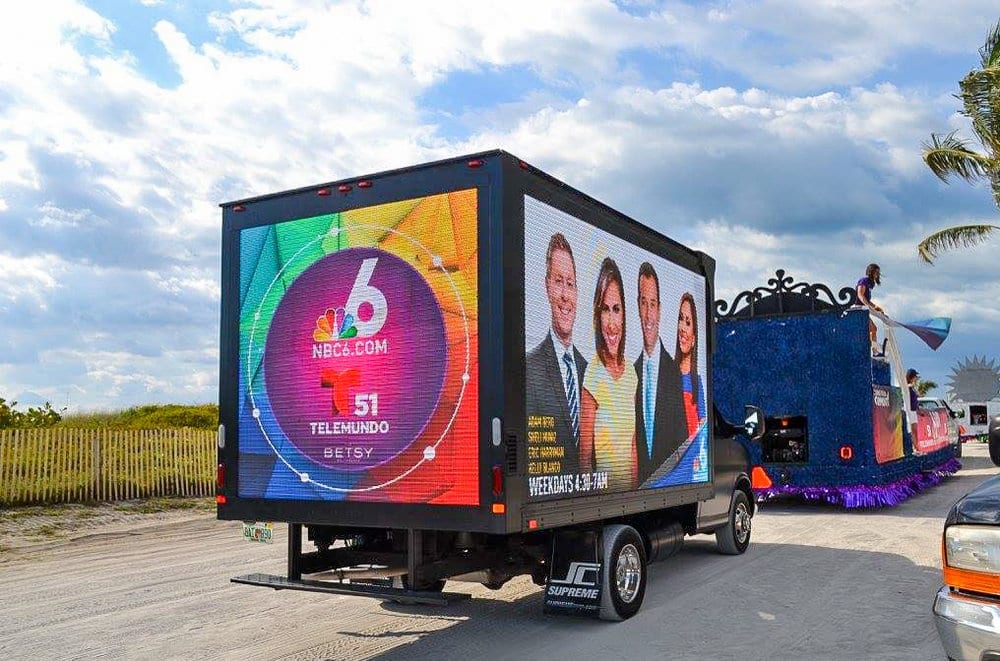 Digital signage has changed drastically over the past few years or so. From the basic and relatively simple signage of the early millennium to today’s plethora of interactivity and intelligence, digital signage is still currently going through a transformative period with thanks to innovations such as the Internet of Things (IoT), advanced wireless networks, and edge computing, among others.

On-vehicle digital signage is one way in which these technologies are being used to enhance and improve traditional marketing and advertising methods. On-vehicle signage is no new invention by any means, some of the first instances of the commercial use of signage where by traders who would put signs on the sides of their horse carriages to advertise their goods.

Signage has evolved considerably since then, and more and more businesses and organisations are choosing to invest into on-vehicle advertising LED’s for mobile environments to enhance and improve their advertising and marketing operations.

As was previously mentioned, mobile signage has been around for over 100 years, however, the digitization of this kind of signage didn’t happen until only the past few years.

Thanks to capability of modern wireless networks and smart devices to share and exchange data at near real-time speeds, mobile digital signage is able to provide the kinds of marketing and advertising you would expect to find outside or within a physical store.

There are several scenarios in which on-vehicle or in-vehicle digital signage has already begun to be utilized by various companies. Sports and events, for example, have been using these technologies for several years now in an effort to both enhance their advertising operations as well as provide new and improved services before, during, and after sports and events. Below are a few examples of digital signage in mobile environments:

When it comes to Public transport, most applications of Digital Signage are inside of the vehicle. Transit agencies are utilizing in-vehicle computers built with military grade shock and vibration resistance to deploy not only digital signage but also other functions all in one platform.

Lanner’s V3S and V6S are prime examples of such hardware platforms, that offer ample CPU horsepower to run a high resolution digital signage campaign or a mix of infotainment, video surveillance, fleet tracking and vehicle diagnostics all on one single platform. With on-vehicle digital signage, businesses are able to promote their goods and services by targeting specific areas and sending their signage vehicle out in that direction. They are also a great way to showcase new offers and deals as well as provide a digital map towards the business itself.

There are also a number of potential applications within public events and ceremonies that could be utilised in order to enhance and improve operations during these kinds of events.

During this time of year, remembrance festivals commemorating all those lost in the two world wars are common, and on-vehicle digital signage could be used within ceremonies for various purposes such as information about the next event, timetabling, and even displaying the lyrics to hymns being sung on the day.

There are also other potential uses for on-vehicle digital signage that have less to do with marketing and advertising and more to do with public and road safety.

Samsung, for example, are currently trialing a version of on-vehicle digital signage that works as a frontward facing camera, enabling those driving behind the equipped vehicle to see what is in front of it in an effort to improve road safety.

As we move further and further into the age of Internet of Things, the way in which we utilize technologies such as digital signage is bound to change and transform as time goes on. With better processing power, high resolution displays and super high speed internet connectivity, digital signage will become much more pleasant and personalized in future and that applies to fixed as well as mobile applications of digital signage.

From humble beginnings on the side of horse-drawn carts to being utilized as a way to improve road safety, digital signage, particularly the on-vehicle variety, will likely have much more to give over the next few years.

There are various applications for this technology under development as we speak, and it would seem likely that, given another decade or so perhaps, the stark contrast between the mobile signage methods of the past and modern digital signage will become ever more evident.