What is 100 Gigabit Ethernet Technology: How does it affect your business?

The Ethernet connection has become a critical part in all current business. From the simple interconnection between the computers and the server, to the practical and economically beneficial Voip technology. But the bigger the business, the more beneficial applications are obtained from Ethernet connection: Video surveillance systems with high definition image accessible from any computer on the LAN video conferencing with higher quality image and audio, Distributed Storage Area Networks with which we can communicate more quickly, faster data backup as well as disaster recovery.

All these great applications in the business have only been possible thanks to the continuous increase in Ethernet connection speeds. Given that the 100 GB Ethernet connection is just around the corner, in this article, we will answer some questions that will help you to know how to keep you and your business up to date with the latest available speed and thus be able to invest and implement it in the precise moment to obtain the greatest cost-benefit.

Why more and more speed?

To answer this question we need to put ourselves in the historical and practical context. Preceding the first technology called ARPANET, the Ethernet connection began in the seventies and was initially invented with the intention of being able to interconnect more than two computers so they could communicate with each other, thus becoming the standard for the Local Area Network (LAN). The initial speed at which it was counted was only 10Mbps and later the speeds were increased more or less in the following sequence giving rise to new services in the network: 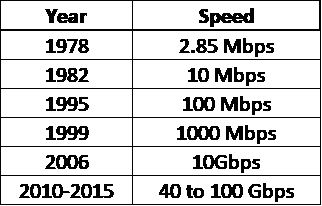 The possibility of having faster available media allows us to have faster access to the files within the network in our office, university, etc. However with speeds going from 40 to 100 GB is in the backend where this really has the greatest benefit, for example in the server rooms, especially the datacenter. What is the reason for this increase in the demand for speed? According to a study by a well-known brand of telecommunications equipment in just five years, the increase in Internet traffic has increased by 31%, mainly due to the growth in the volume of information in the datacenters that now host virtual servers of large companies and receive large data requests when being used by the companies to attend requests of mobile devices that are always on and need to be updating information in real time.

This is also the case of web servers that have to deal with increasingly complex requests and must be resolved within the backend environment to finally respond with the requested information.

At present, some brands have made great advances in the manufacture of high-end equipment with connections of up to 40Gb or even 100Gb, aimed primarily at telecommunications operators or companies offering cloud computing services. 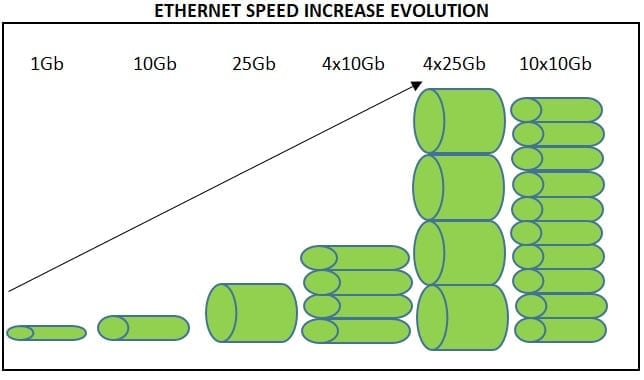 What points should I consider if I want to increase my Ethernet speed to 100 GB?

If a company is considering updating the connection speed of its backend to 100 GB, these are some of the factors to consider:

Returning to the aspect of data quality, the higher the speed the more critical this point becomes. What options exist in the market that can help analyze our data at speeds of 100 GB and what can even help us optimize our WAN connection to send such data? This especially in cases such as having different branches or data centers distributed geographically or also in cases of accessing systems in the cloud or remotely (e.a. ERP’s, mobile applications, etc.)

Take for example the Lanner NCA-6210, a high performance network device for Network Security and Virtualization. Which can work at 100 GB Ethernet connection speed thanks to Intel Integrated QuickAssist technology, which is a hardware technology that accelerates critical workloads such as data compression and cryptography in server applications, storage and network. What are the advantages of this particular device? Its versatility. Since this can perform different functions that benefit the traffic at not only LAN level (north-south and east-west traffic) but also at WAN level.

Some of the applications for which it is designed are:

As any big expense decision in any company, in the case of the data network, it should be analyzed not only the cost-benefit ratio in the short and medium term, along with the hard saving. But also the benefits to a longer time and soft savings.

The future of the Ethernet connection

Although in the early stages of the Ethernet connection it took several years to see a considerable (in some cases a decade) increase in speed, this has begun to change faster since the needs of companies, public and scientific institutions and the general public needs are changing and are increasingly demanding more and more information from data centers. Therefore, we must be very watchful to be able to benefit at the right time from these continuous improving technologies.