10 Cyber Security Predictions for 2018 – Is your IT/OT Network Ready?

There are so many predictions for 2018 when it comes to cyber security. Gathering them all would make an endless list. So let’s focus on the ones that are more likely to happen.

GDPR will be effective in May 25th in the European Union. Programmers and engineers are working on developing ways to stop or somehow prevent the imminent attacks by the hackers worldwide. Here are a few of the threats, as this year is expecting an overwhelming number of attempts to bypass the security and privacy of the servers around the globe, and this, is also a prediction.

1-Fiercer attacks on the Internet of Things.

Although IoT faces basically the same risks though at a higher level as it did during 2017, no significant changes are expected on US law pertaining to this matter. That is why there is a great controversy, because apparently the EU intents to enforce these kinds of laws.

The increase of hivenets and self-learning swarmbots, such as Hajime and Devil’s Ivy, makes it easy to predict that cyber-delinquents will opt for these to create more effective vectors of attack; this way replacing the botnets. Various cyber security companies’ labs have registered billions of attempts of communication among botnets this year, which makes this foreseeable as a very serious matter.

Extortion to commercial services as a pseudo-business is another terrifying subject. In spite of the large amount of threats of ransomware, it has grown dramatically in the last year thanks to the ransomworms and some other types of attacks; yes, there are more types coming. It’s safe to say that the targets of ransomware this year are probably going to be the service providers of the cloud, being that there are hundreds of companies, governmental entities, critical infrastructures, and medical care organizations that are hyper-connected through it.

The use of fake and/or malicious news through bots is also something expected. Multi-vector DDoS, SSL, exploits, Trojans and malware attacks have been a classic way to infiltrate from IRC servers to critical infrastructure and even national security, so there is no reason to think it won’t be used and improved this year. The metadata will make it easier for the already professional phishing techniques.

The dark web and cyber-crime economy will offer new services through automation. As the world of cyber-crime evolves, so does the dark web. Advanced services offered in the market of the dark web that take advantage of automated learning can already be seen.  As part of a defense against these attacks, sandbox tools provided with automated learning can be used to swiftly identify threats that weren’t identified that easily before and thus, create protections dynamically. 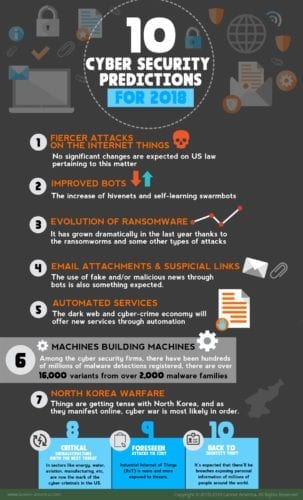 Next-generation morphic malware is a threat that may not be a new thing, or that may not be completely out there this year, but it’s something that we will start seeing soon enough. Malware entirely created by machines based on automated detection of vulnerabilities and complex data analysis. As mentioned, polymorphic malware is not something new, but it may gain strength as it seems to be taking advantage of artificial intelligence to create new and sophisticated code that is capable to learn to avoid its detection. Among the cyber security firms, there have been hundreds of millions of malware detections registered, and of these, there are over 16,000 variants from over 2,000 malware families.

Things are getting tense with North Korea, and as they manifest online, cyber war is most likely in order. Experts say that North Korea’s cyber weapons are equally as potent and devastating as their own missiles. Their intelligence is capable of performing cyber-attacks as well as cyber-espionage. North Korea hackers are surprisingly gifted, considering the limitations and restrictions on the access to internet. These hackers pose a serious threat to cyber security, not only for the US, but also for its ally countries.

8-Critical infrastructure onto the next threat.

The European Union has been a target of attacks throughout the past two years. Hackers have been setting their objectives in power grids and manufacturing plants so far, as maybe a part of training understanding of the intelligence behind their cyber security. Therefore, critical infrastructure, in sectors like energy, water, aviation, construction, etcetera, are now the mark of the cyber-criminals in the US. It is very possible that this year, these sectors will be the bullseye of vicious attacks like nothing we’ve ever seen before. Hopefully these sectors are doing their own, working diligently to prevent said attacks.

Every kind and every category of companies are connected and online more than ever, and hackers are aware of it. Industrial Internet of Things (IIoT) is more and more exposed to threats. This means there are so many risks for the population in general that even the slightest product in the market could represent a privacy issue, a financial loss, a harmful or even a life-threatening situation. Let’s say a man-operated machinery manufacturer was hacked; this could have a result of malfunctioning machinery that could endanger its operator. Online money transferring mediators such as the peer-to-peer payment services like PayPal, venmo or Google Wallet, have always been the center of attraction for cyber-criminals. Major Banks, the stock market and other money-related institutions are struggling to keep it safe as it is. Consumers are in risk of losing their money if there isn’t a security system that will protect them.

10-Back to identity theft.

Following the same order of ideas, looks like the already popular practice of identity theft is coming back. It is expected that there will be breaches exposing personal information of millions of people around the world. That’s why it is advisable to take measures to prevent these threats. Strong unique passwords to protect the accounts, extra authentication to make them safer, keeping this kind of information for oneself, and being careful before click on any links that may look sketchy, aside from avoiding ads or offers that seem too good to be true, will help.

These predictions have, of course, a counterpart. As the threats grow larger, and the hackers prepare forthcoming attacks, internet police and the companies’ cyber security technicians are most likely using similar code to enable their own bots automated to self-learn. Firms that develop security software such as antivirus, antispyware, antimalware, antiphishing and more, tend to do this to be up to date and thus recognize and counter the behavior of malicious software.