How would a smart light-bulb, an intelligent shirt, a heart monitoring system, a TV, and a smartphone, communicate with each other?

Although different organizations are already working on IoT standards, it is still an ongoing process. In the near future, there will probably be thousands of different rules and protocols guiding communication in an IoT ecosystem.

On top of that, IoT is creating unimaginable amounts of data. We might have already heard the statistics. A report from Gartner forecasts that by the end of 2019, a total of 14.2 billion things will be connected to the Internet. And this number will increase to 25 billion by 2021. Imagine billions of devices at the edge with different standards sending information to the Internet.

This complex environment with massive amounts of data is making IoT devices communication challenging and slow!

For now and in the future, the IoT devices use a gateway as a central hub to drop sensed knowledge and communicate with external networks. The IoT Gateway stands as one of the key elements in this ecosystem. It handles all communication with all sensors and remote connections such as the Internet, applications, or users. 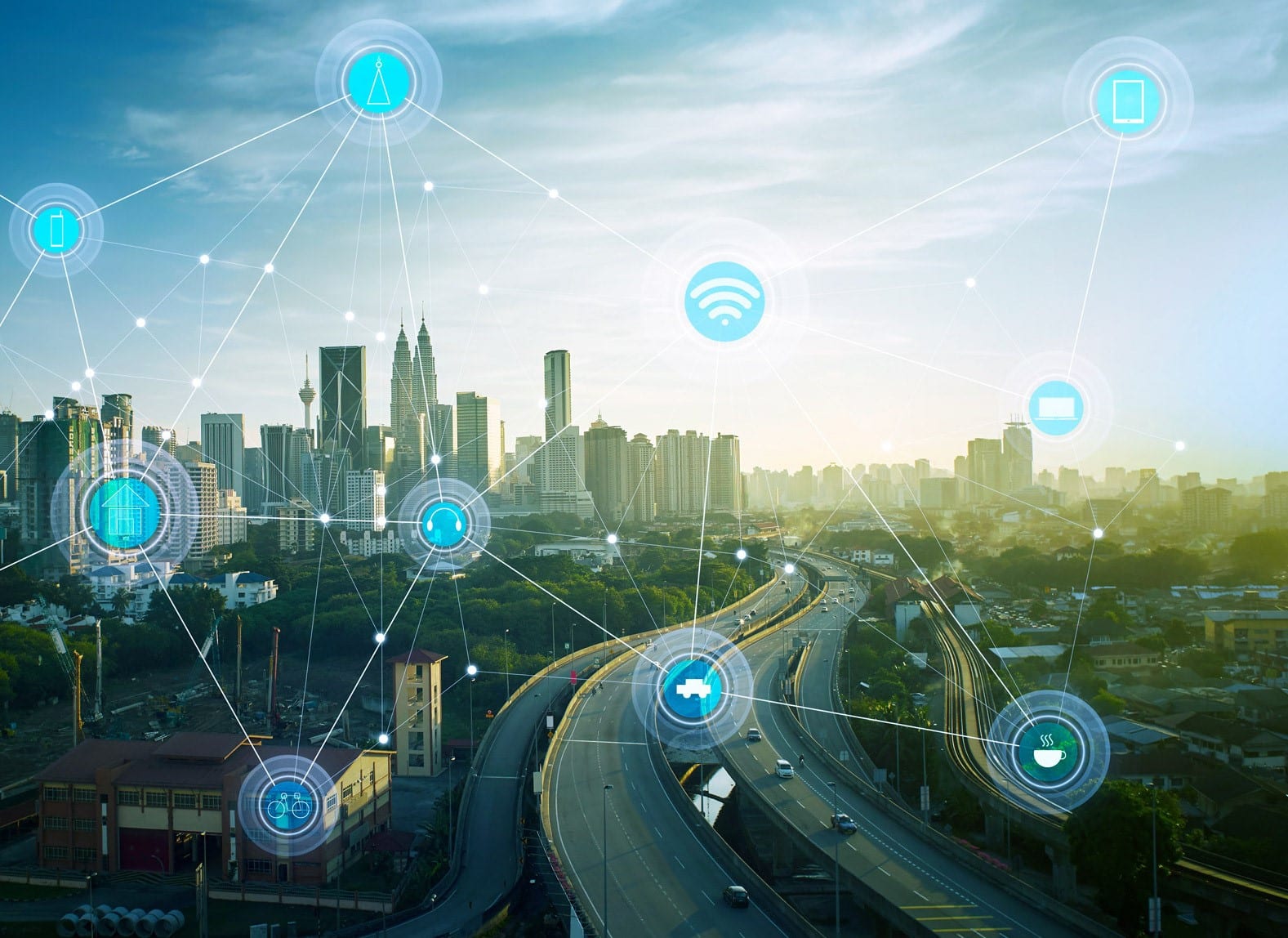 Table of Contents
1. What is an IoT Gateway?
1.1. IoT Gateway Key Features
1.2. How does an IoT Gateway work?
2. What are the benefits of using an IoT Gateway?
2.1. Pre-Process data at the edge to improve response times
2.2. Provide security for the IoT data by adding an extra line of defense
2.3. Improves energy efficiency on the IoT devices
2.4. Translate all mixed IoT connection types into a single standard protocol
3. IoT Gateway Use-case Scenarios
3.1. The IoT Gateway can provide secure communication in industrial IT and OT domains
3.2. An IoT gateway to handle imaging devices within healthcare in a secure way
3.3. In-Vehicle IoT Gateway to provide Vehicle Area Networks (VAN)
4. Final Words

What is an IoT Gateway?

In telecommunications, the primary purpose of a gateway is to provide a bridge between different types of communication technologies. These technologies can vary in terms of connectivity types, interfaces, or protocols. For example, your Internet Gateway at home connects your Local Area Network (LAN) with your Internet Service Provider (ISP). This gateway links the WAN of the ISP through technologies like PPP or HDLC with your LAN with TCP/IP.

The IoT Gateway follows the same principle of bridging communications for different technologies. It creates a bridge between the IoT sensors/actuators and the Internet. The IoT gateway aggregates all data, translates sensor’s protocols, and pre-process the data before sending it.

The IoT devices connect to the IoT Gateway using short-range wireless transmission modes such as Bluetooth LE, Zigbee, Z-wave, or long-range like LTE, LTE-M, WiFi, and then it links them to the Internet (Public Cloud) through Ethernet LAN or Fiber Optics WAN (HDLC/PPP). 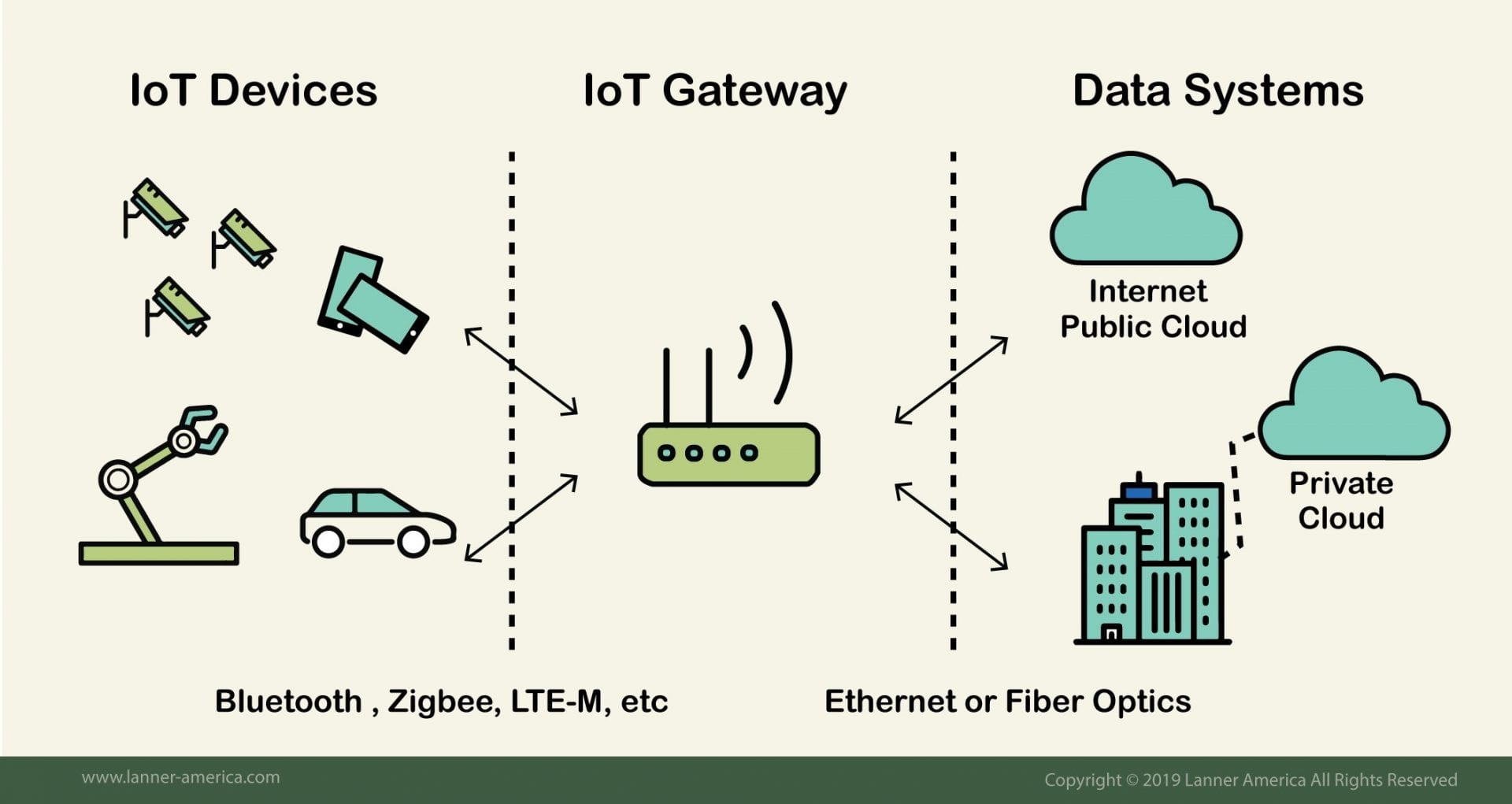 The IoT gateway understands these transmission modes and data (MQTT, CoAP, AMQP, DDS, Websocket) protocols and can translate them to other protocols that the data systems needs.

How does an IoT Gateway work?

Most IoT devices in networks nowadays are capable of aggregating data. For example, sensors in car traffic can aggregate data and send it to an AI analysis service in the cloud. But to reach the cloud, the sensors must first send all this raw data to the IoT Gateway.

What are the benefits of using an IoT Gateway?

Pre-Process data at the edge to improve response times

The IoT gateway provides software-driven capabilities at the edge network, which is known as edge computing.  The gateway uses this power at the edge to deal with the massive amounts of data that IoT sensors generate. If all this data had to be transferred by the gateway (including junk and unnecessary data), the latency in communication would be significantly affected. In order to reduce this data overload, an IoT gateway uses edge computing capabilities to collect, analyze, and declutter these large volumes of data.

The IoT gateway can pre-process and filtering out data that is not needed at the endpoint so that there is less data to be forwarded.

An IoT smart toy called My Friend Cayla was banned in Germany because it was labeled as an espionage device. The toy had no security standards whatsoever. A person could hack it, and listen to entire conversations around the doll, and even speak through it. But this is not the only case; there are also home thermostats, self-driving cars, video surveillance, and even entire food factories, being hacked.

An IoT gateway provides the first line of defense. It reduces exposure to the Internet and other external parties. All IoT devices must be connected to the gateway to communicate, which makes it, the first target to an attack. Without a gateway in the middle of communication, the entire IoT ecosystem is at risk.

IoT is making driving safe, through sensors deployed in roads, traffic lights, and crosswalks. But these sensors need to be highly autonomous in terms of energy. They need long-range connectivity to send data to cellular towers or satellite, which consumes large amounts of power.

Applications such as this one, usually fail because sensors/actuators have limited battery life. In other cases, even energy-intensive technologies like Bluetooth and WiFi are not supported by most of these IoT sensors. But a nearby IoT gateway connected to the grid can serve as a bridge to shorten those signal ranges and manage all sensor’s communication.

With this approach, the sensors only need a short-distance signal range, so they use low power radios and thus save precious battery life.

The IoT sensors job is to collect data from the external environment and send it to an analyzer (in the cloud or server). In an application such as “safe driving,” the sensed data from a wide arrange of sensors, could be movement, light, video-cameras, etc. But the content of the data is irrelevant to the communications mechanism. All that a communication protocol needs to do is make devices communicate with each other efficiently and send their data to a central analysis platform.

But if there will be 25 billion IoT devices by 2021, there will likely be a broad ecosystem of transmission protocols, rules, and standards. An IoT gateway should be able to understand many of these protocols and translate communication from the sensor to the cloud.

Below are some examples of real-use case scenarios where IoT gateways could be used. Every case comes with an example of an IoT gateway appliance. There are tons of different classes, and types of IoT gateways, but the ones here are appropriate for each case.

IoT can help the shipping container industry by keeping track of every container and improving their security. The challenge is that shipping containers are usually located around wet and temperature-wide areas. An IoT gateway for this type of industry needs to be designed for low power consumption, high processing performance, security capabilities, and ready for extreme environments.

An example is the IoT Gateway LEC-6041 that offers: IoT imaging devices within the healthcare sector can help radiologists adjust external factors such as the light setting of the room and control radiation exposure. But what is better is that by having X-rays connected to the Internet, they can use ML and AI services on the cloud to analyze thousands of high-quality images.

An IoT gateway can forward large volumes of image data and provide the security that healthcare needs.

An example of this type of IoT Gateway is the LEC-7230. It can provide the following functionalities. Emergency response vehicles such as ambulances or police need IoT devices such as cameras, radars, mapping systems, or sensors to improve the job of the public safety workers. An in-vehicle gateway can provide safe and reliable access to these IoT devices in a VAN to external networks.

Emergency response vehicles are in constant movement, high speed, rough terrains, etc, so they need equipment to be built for this purpose. These in-vehicle gateways need to be rugged — from anti-shock, waterproof, anti-dust, temperature-proof, and humidity-proof. These devices also need improved coverage with technologies such as LTE.

In a world without gateways, our devices couldn’t communicate with the Internet or outside networks. Gateways do the standard task of a router which is to forward packets in multi-hop environments. But it is also capable of connecting different devices with different technologies.

The IoT gateway is a key element in IoT ecosystems. It is the bridge of communications— it connects Zigbee sensors with the Internet, Bluetooth devices with a native-cloud application, and more. It helps reduce latency and improve capacity at the edge by pre-processing raw information. The IoT gateway also provides an extra line of security in these vulnerable environments.

What is an IoT Gateway? was last modified: March 30th, 2020 by Rick Spencer