The traditional service provider’s central office network where all subscribers connect to and create a sort of central loop is becoming history. Its proprietary single-function hardware and legacy networks are not capable of supporting the massive demands of new applications and services.

NGCO will be the key to 5G. It will help create flexible core networks located closer to the edge, providing a much better user experience at a lower latency.

Table of Contents
1. The Central Office and its Evolution
2. What is Exactly the Next-Gen Central Office (NGCO)?
3. Benefits of moving intelligence to the edge with NGCO
4. NGCO, Real-life Use Cases
5. Why is NGCO a Foundation for 5G evolution?
6. NGCO Infrastructure
7. Final Words

The Central Office and its Evolution

The new applications out there are driving the evolution of networks. Applications like telemedicine, telemetry, videoconferencing, autonomous vehicles, VR/AR, and video streaming, create an excessive amount of traffic volume.

In fact, it is believed that by 2022, the video will be around 75% of all mobile data traffic, according to an Ericsson report. In fact, today only the popular video streaming service, Netflix is eating up 15% of all Internet downstream traffic worldwide, according to the latest Global Internet Phenomena Report from Sandvine.

Although service providers are still providing their users with a good experience, they are struggling to keep up with this new demand. Their legacy Central Office (CO) networks are just unsuitable for these jobs. They are incapable of adjusting their resources as services request and extend their power to the edge.

How to solve this?

Applications like video streaming need the power that is closer to where they are being used— at the network edge.

Network providers and operators need to move away from their central and fixed-function networks on proprietary hardware. They need to look into the network and find what services and applications they can virtualize, containerize, or even better make cloud-native.

What is Exactly the Next-Gen Central Office (NGCO)?

The Next Generation Central Office (NGCO) is an evolution of the traditional Central Office (CO). The CO is the place where all subscribers and users connect to. The NGCO changes this approach, it decentralizes the power of the CO (Core Network) and distributes it to the network edge, the access, customer premises, and even devices.

Some COs are already using NFV (Network Functions Virtualization) at the central cloud. But the NGCO takes this approach to another level — it aims to move these network-functions, closer to the edge. In other words, it attempts to bring the cloud and its applications closer to the end-user.

The NGCO works as a pool of resources for Virtual Network Functions (VNFs), SDN, and other services. It provides incredible flexibility when provisioning a network because VNFs can be deployed automatically. With NGCO, the providers can use VNFs directly from this pool and provision to a variety of customers and scale on demand. These VNFs can run on a single server, but when demand scales, they can run on various servers or even entire racks.

Benefits of moving intelligence to the edge with NGCO

Below are some of the benefits of moving intelligence to the edge and using generic network appliances with NGCO.

Service providers are probably the first ones to benefit from NGCO. They will be capable of providing flexible services to the enterprise, mobile, and home networks, with smaller and decentralized data centers.

Network service provider ACME provides Internet, WAN connectivity, VoIP, and video streaming to an entire city and its suburbs. ACME knows that the demand for network service is usually low at late hours when everybody is sleeping and early in the morning. But as soon as people start the day, they turn on their mobiles and their commute begins, the demand for mobile services rises up.

ACME uses the NGCO to allocate most of their resources to the mobile network functions (like vEPC or C-RAN) which are currently on demand. Once people get to their office, the demand for enterprise network services rises up dramatically. People connect to the cloud, start using VoIP, connect to certain apps, and branch offices (SD-WAN). To avoid service interruption at the enterprise edge, ACME uses NGCO to automatically reduce home and mobile services resource demand and spin up new enterprise-tailored VNFs to help balance the load.

When the afternoon comes and people return home, the demand for the enterprise VNFs is greatly reduced. Now NGCO allocates most of ACME’s resources back to mobile and home networks (probably services like Internet and video streaming).

NGCOs can be transformed in mini-data centers and can also be distributed to different districts within the city. Taking intelligence of cloud-native network functions closer to the edge will provide higher capacity for services like video streaming, telemetry, etc. In some instances these mini-data centers can even be located at the cell site, with CloudRAN and MEC, which is the foundation of 5G.

Why is NGCO a Foundation for 5G evolution?

Network functions are evolving from native, to virtualized, to cloud-native. And this is where it gets interesting…

Current NFVs will evolve from the central cloud and move towards the edge cloud — right where 5G needs them. In the edge the grass is greener, there is a higher chance of lower latency and higher capacity.

For 5G to work properly, it needs ultra-low latency speeds, that only NFV and SDN can deliver. 5G will likely adopt all the same technology that we see in the IT world, and bring it into the mobile networks. The new 5G workloads will need to be containerized, run on the right cloud-native infrastructure, and orchestrated properly.

The NGCO aims to deliver its cloud-native core closer to the end-user, at the edge. Here, the network can respond quicker to the demands of new applications and apply the capacity to where is really needed. The NGCO will also provide a way to orchestrate all of this infrastructure.

NGCO will be a key component in 5G rollouts. It will complement the capabilities needed by 5G on the edge side with a highly flexible cloud-native core network. 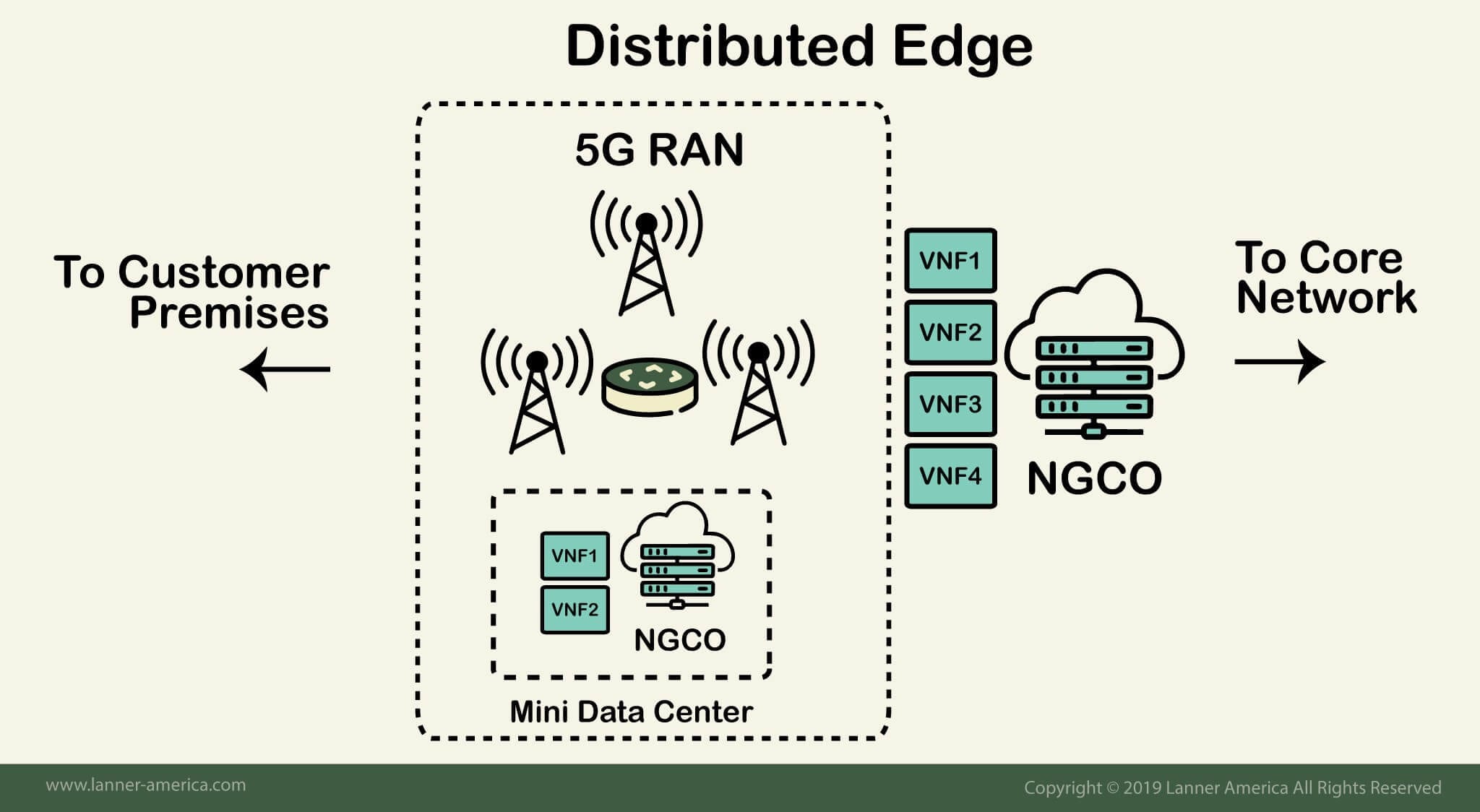 For mobile networks, the NGCO hardware can be deployed between the Radio Access Network (RAN) and the Core Network (Central Cloud). But we might even see cases where placing the NGCO between the RAN and customer premises is better. Being close to the edge will help enable secure and flexible service deployment of 5G.

Lanner offers appliances that collaborate to create a NGCO. A single rack can fit essential components that build up an NGCO, such as:

The transformation of the edge will provide all the necessary computing power, agility, and speed to support all these high demand applications and edge services. Having all this power at the edge will be the key to the 5G technology.

Instead of having to deploy dedicated and propriety appliances for each network function, service providers can support advanced mobile and fixed networks on generic servers. A single box can be transformed into a mini data center. Providers can look into COTS general purpose

NGCO will be the key component to introduce the unified edge NFVi (NFV infrastructure) approach, which leverages virtualization technology and cloud-based computing. It will be the edge NFV data center that will run all those new VNFs and cloud-based network functions.

What is NGCO and why 5G needs it? was last modified: December 19th, 2019 by LEI Technology