Industrial automation can be roughly defined as the use of technology and control systems (Industrial PC, PLC, PAC, etc) to automate industrial processes to improve on quality and output without the need for significant human intervention. Control systems are used to dictate the automatic operation of integrated technology and other equipment. In large car factories for example, automated robotic arms speedily perform labor intensive, menial or repetitive manufacturing tasks along a production line to better degree of precision that human manual labor could produce in the same timescale.

So, what controls this automation? Enter the industrial computers at the heart of most industrial automation systems.

Due to their environmental and operation benefits, industrial PC’s now come in all shapes and sizes. From a rugged single board computer to a full blown industrial grade fanless box PC with powerful Intel CPU, HD Graphics and rich I/O. industrial PCs are shaping the future of industrial automation. Programmable logic controllers (PLC) and programmable automation controllers (PAC) look now to be slowly giving way to industrial PCs due to the latter’s flexibility, functionality, performance and cost. PLCs are essentially a type of micro controller used for controlling machines. They consist of memory, a processor and input/output (i/o) functions and are able to carry out preprogrammed functions such as mathematics, counting, communication, manage sensors and trigger actuators. PACs are usually more advanced PLCs that include general computing processors and use ethernet communications.

Industrial PC can be found deployed in a multitude of operational scenarios including manufacturing floors in  factories, embedded in security and surveillance architecture and other technological set ups involved in process and machine automation. Compared to general purpose commercial grade computers, Industrial PC´s ability to endure the often harsh environment found in industrial environment and the like makes them a popular solution to manufacturing, energy, transportation, agriculture and other similarly environmentally challenged industries. These rugged computers are also able to provide more flexibility than PLCs and PACs due to their ability to run human-machine interface (HMI) applications. The use of real-time kernels improves upon older automation models by allowing the automation to be separate from the operating system (OS) environment. This in turn enables it to take precedent over the OS for priorities such as input/output interfacing.

Rugged Industrial PCs offer the best hardware platform for large scale manufacturing that exceeds the labor limitations of the average human workforce. Machine automation has done for mass production what the internet did for communication. Having had a wobbly start in its infancy, industrial PC systems are now heavily relied upon by many manufacturers, not just for machine vision and robot guidance, but also the ability to collect valuable data from machinery and equipment for preventive maintenance. 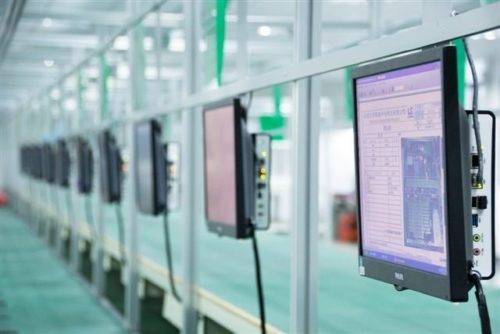 Another major application in manufacturing is of course the vision controlled quality assurance that functions at a much higher speed and with greater accuracy than is possible by humans. Using machine vision and packaging inspection systems manufacturers as well as food packaging plants automate quality assurance of their products at a great speed. 3D machine vision is the latest advancement in the Vision industry. Its commercialization has become reality thanks to the powerful multi-core CPU´s that can handle computation of an extra Z dimension at a super fast speed, providing deeper multidimensional data on the object making 100% quality assurance possible. This has taken the quality control to a next level where the pass/fail decision of the system can depend on many more parameters such as proportion, shape, surface, size, etc.

Manufacturing isn’t the only industry that has begun to rely heavily upon industrial PCs. Retail and healthcare sectors have also implemented industrial PC hardware into their everyday operations due to their ability to track and monitor assets and processes for inconsistencies and anomalies. This can be done both on-site and remotely and provides systems operators with a way of tracking assets or processes in a much more precise and efficient manner than would normally be possible with a human workforce.

Industrial PC platforms use powerful processors in order to emulate and create simulations of potential real-world scenarios. This enables enhanced insights for analyzing risks, predicting further possibilities and testing systems within any framework. Being able to do these kinds of tests and analysis allows further enhancement and development of existing infrastructure based on insights gathered from simulations and predictions. With much buzz around artificial intelligence and machine learning, advancements in the near future could see these three technologies woven together in order to create even more advanced simulations.

In the age of automation and the Internet of Things, data is one of the most valuable commodities around. The ability of remote IoT sensors to send and receive data about the use of remote machinery, tools, hardware and other connected devices allows operators that deploy them to receive actionable data about operational processes, equipment fatigue, and overall performance. This data allows control systems to know when to regulate power to equipment, trigger actuators, adjust temperature or pressure controls and other operational functions in an extremely precise manner. IoT and PC based Automation

The applications mentioned above are but a few of the ways industrial PCs are being used to further enhance and improve upon existing industrial automation technologies. From PLCs to PACs and now industrial PCs, what the future has in store can only be guessed. However, if the costs of computation and communication technologies keep dropping at the same speed as the new innovations are coming, we certainly are looking at the full potential of IoT realized in forecasted timeframes resulting in unprecedented efficiency in production and higher consumer satisfaction.

PC is at the heart of open standards based internet of things revolution especially at that of the Industrial internet of things which will become the brain controlling the infrastructures that communities and economies will rely on in their daily lives. Legacy operational technology systems and instruments will need to be protected with more intelligent computers until they are replaced with cutting edge secure technology. IoT communication gateways will not only require superior ruggedness in their built and components but also robust cyber security embedded into the software managing communication between the things.